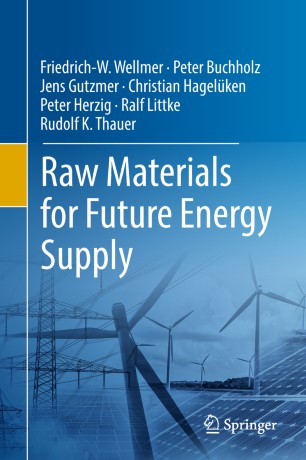 This is the first book that analyses the future raw materials supply from the demand side of a society that chiefly relies on renewable energies, which is of great significance for us all. It addresses primary and secondary resources and substitution, not only from technical but also socioeconomic and ethical points of view.
The “Energiewende” (Energy Transition) will change our consumption of natural resources significantly. When in future our energy requirements will be covered mostly by wind, solar power and biomass, we will need less coal, oil and natural gas. However, the consumption of minerals, especially metallic resources, will increase to build wind generators, solar panels or energy storage facilities. Besides e.g. copper, nickel or cobalt, rare earth elements and other high-tech elements will be increasingly used. With regard to primary metals, Germany is 100 % import dependent; only secondary material is produced within Germany. Though sufficient geological primary resources exist worldwide, their availability on the market is crucial. The future supply of the market is dependent on the development of prices, the transparency of the market and the question of social and ethical standards in the raw materials industry, as well as the social license to operate, which especially applies to mining. The book offers a valuable resource for everyone interested in the future raw material supply of our way of life, which will involve more and more renewable energies.