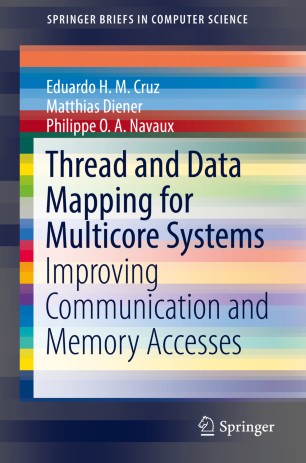 This book presents a study on how thread and data mapping techniques can be used to improve the  performance of multi-core architectures.
It describes how the memory hierarchy introduces non-uniform memory access, and how mapping can be used to reduce the memory access latency in current hardware architectures.
On the software side, this book describes the characteristics present in parallel applications that are used by mapping techniques to improve memory access.
Several state-of-the-art methods are analyzed, and the benefits and drawbacks of each one are identified.

Matthias Diener received his PhD degree in Computer Science from the Federal University of Rio Grande do Sul (UFRGS) and the TU Berlin in 2015. He is currently a postdoctoral researcher at the University of Illinois at Urbana-Champaign. His work focuses on adapting parallel applications to the hardware they are running on, through improving data locality, load balancing, and support for heterogeneous systems.

Philippe O. A. Navaux graduated in electronic engineering from UFRGS in 1970, and received the masters degree in applied physics from UFRGS in 1973 and the Ph.D. degree in computer science from INPG, France in 1979. He is a professor at UFRGS since 1973. He is the head of the Parallel and Distributed Processing Group at UFRGS and a consultant to various national and international funding agencies such as DoE (US), ANR (FR), CNPq, and CAPES (BR).