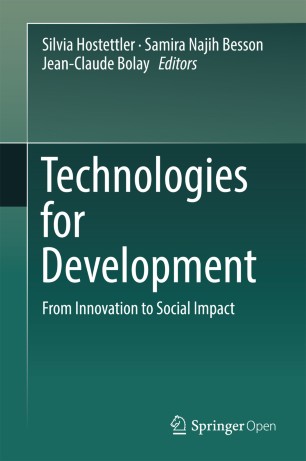 From Innovation to Social Impact

This open access book presents 18 case studies that explore current scientific and technological efforts to address global development issues, such as poverty, from a holistic and interdisciplinary point of view, putting actual impacts at the centre of its analysis. It illustrates the use of technologies for development in various fields of research, such as humanitarian action, medical and information and communication technology, disaster risk-reduction technologies, habitat and sustainable access to energy. The authors discuss how innovative technologies, such as unmanned aerial vehicles for disaster risk reduction, crowdsourcing humanitarian data, online education and ICT-based medical technologies can have significant social impact. The book brings together the best papers of the 2016 International Conference on Technologies for Development at EPFL, Switzerland. The book explores how the gap between innovation in the global South and actual social impact can be bridged. It fosters exchange between engineers, other scientists, practitioners and policy makers active at the interface of innovation and technology and human, social, and economic development.

Silvia Hostettler is an environmental scientist and international development scholar with 20 years of experience in researching sustainable development challenges in the global South. Her particular interest focuses on the question how technological innovation can support poverty reduction and sustainable development. She studied at the University of Geneva, the University of Aberdeen (UK) and at EPFL, conducted research in Burkina Faso, Ghana and Mexico and was based in Bangalore for four years as Executive Director of swissnex India. She also worked at IUCN – The World Conservation Union on tropical cloud forest conservation. Since September 2012 she is Deputy Director of the Cooperation and Development Center (CODEV) at EPFL where she conducts researchin the fields of disaster risk reduction and renewable energy and directs the International Conference of the UNESCO Chair in Technologies for Development. She is also in charge of postgraduate education offered by CODEV and gives lectures in the field of Development Engineering. Her research interests include technologies for development, sustainable access to renewable energy, disaster risk reduction and land use change. She has written various articles and other scientific publications on these topics.
Samira Najih Besson is a Geologist Engineering and holds a Master in Sciences Geology from Lausanne University. She studied at the University of Geneva and FSTG – Cadi Ayyad University of Marrakech. She has been engaged professionally with private and public sectors, UNOSAT, UNHCR and the IFRC where she conducted projects on geology, hydrogeology, GIS, information management, environmental study, natural hazard disaster management. Currently, she is project manager of the International Conference of the UNESCO Chair in Technologies for Development at CODEV, EPFL.
Jean-Claude Bolay was appointed Director of Cooperation at the Ecole Polytechnique Fédérale de Lausanne (EPFL) in 2001 and has headed what recently became the Cooperation & Development Center (CODEV) since 2005. A sociologist by training, he specialized in urban issues in Latin America, Asia and West Africa. He prepared his PhD in Political Sciences at El Colegio de Mexico, then at UC Berkeley, USA. Before joining EPFL in 1989, he worked for the Swiss Agency for Development and Cooperation (SDC) both in Switzerland and in Cameroon. He has carried out many international research projects in Vietnam and Latin American countries in particular, looking at social practices in urban societies, sustainable urban development and poverty reduction in developing countries. He was a scientific advisor and evaluator for the Swiss State Secretariat for Education and Research, the Belgian Universities’ Commission for Development and the French Ministry of Foreign Affairs, among other institutions. At EPFL, he has directed postgraduate courses on development in Africa and India. In parallel to his position as Director of CODEV, he was appointed Adjunct Professor in 2005 in the Laboratory of Urban Sociology of the Natural, Architectural and Built Environment School.