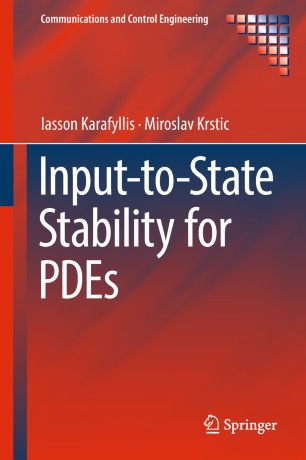 This book lays the foundation for the study of input-to-state stability (ISS) of partial differential equations (PDEs) predominantly of two classes—parabolic and hyperbolic. This foundation consists of new PDE-specific tools.

In addition to developing ISS theorems, equipped with gain estimates with respect to external disturbances, the authors develop small-gain stability theorems for systems involving PDEs. A variety of system combinations are considered:

In addition to stability results (including ISS), the text develops existence and uniqueness theory for all systems that are considered. Many of these results answer for the first time the existence and uniqueness problems for many problems that have dominated the PDE control literature of the last two decades, including—for PDEs that include non-local terms—backstepping control designs which result in non-local boundary conditions.

Input-to-State Stability for PDEs will interest applied mathematicians and control specialists researching PDEs either as graduate students or full-time academics. It also contains  a large number of applications that are at the core of many scientific disciplines and so will be of importance for researchers in physics, engineering, biology, social systems and others.

Iasson Karafyllis is an Associate Professor in the Department of Mathematics, NTUA, Greece. He is a coauthor (with Z.-P. Jiang) of the book Stability and Stabilization of Nonlinear Systems, Springer-Verlag London (Series: Communications and Control Engineering), 2011 and a coauthor (with M. Krstic) of the book Predictor Feedback for Delay Systems: Implementations and Approximations, Birkhäuser, Boston (Series: Mathematics, Systems & Control: Foundations & Applications), 2017. Since 2013 he is an Associate Editor for the International Journal of Control and for the IMA Journal of Mathematical Control and Information. His research interests include mathematical control theory and nonlinear systems theory.
Miroslav Krstic is Distinguished Professor, Alspach endowed chair, founding director of the Cymer Center for Control Systems and Dynamics, and Senior Associate Vice Chancellor for Research at UC San Diego. Krstic is Fellow of IEEE, IFAC, ASME, SIAM, AAAS, and IET (UK), Associate Fellow of AIAA, and foreign member of the Academy of Engineering of Serbia. He has received ASME Oldenburger Medal, ASME Nyquist Lecture Prize, ASME Paynter Outstanding Investigator Award, the PECASE, NSF Career, and ONR Young Investigator awards, the Axelby and Schuck paper prizes, the Chestnut textbook prize, and the first UCSD Research Award given to an engineer. Krstic has also been awarded the Distinguished Visiting Fellowship of the Royal Academy of Engineering and Invitation Fellowship of the Japan Society for the Promotion of Science. Krstic has coauthored twelve books on adaptive, nonlinear, and stochastic control, extremum seeking, control of PDE systems including turbulent flows, and control of delay systems.

“The text is very readable due to ubiquitous remarks, examples, explanations and references before and after the rigorous mathematical derivations. In addition to new results future research topics are also presented. The book is recommended for everybody interested in control systems involving PDEs and their applications.” (Andras Balogh, Mathematical Reviews, December, 2019)
“This is a beautiful book, highly recommended to researchers and, as a textbook, to post-graduates. The graphical conditions are excellent.” (Vladimir Răsvan, zbMath 1416.93004, 2019)
Buy options