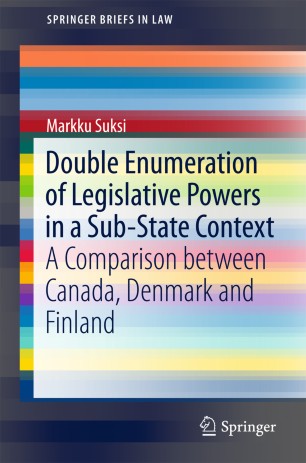 Double Enumeration of Legislative Powers in a Sub-State Context

A Comparison between Canada, Denmark and Finland

This book analyses a middle position between single enumerations in a regular federal-like and a regular autonomy-like distribution of legislative powers by examining constitutional legislation in three countries (Canada, Denmark and Finland) that have established separate enumerations for the national level and the sub-state level. The sub-state level consists of provinces in Canada, the Faroe Islands in Denmark and the Åland Islands in Finland. The book provides interpretations of the competence line based on double enumeration between the national parliament and the sub-state entities, where relevant, on the basis of the travaux preparatoires of the fundamental norms on which the arrangements are based, judicial or quasi-judicial resolutions of competence problems, and relevant doctrine and literature.