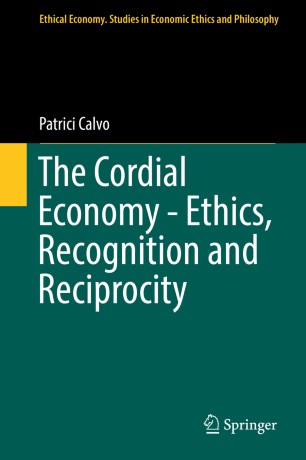 This book proposes, from a civil perspective —such as that developed by Stefano Zamagni— and a cordial perspective —such as that developed by Adela Cortina—, orientations to design an economy in tune with what the historical moment demands. Among other things, this comes from encouraging institutions, organisations and companies to include in their designs aspects as important for carrying out their activities as cordial reciprocity, mutual recognition of the communicative and affective capacities of the linked or linkable parties, public commitment and the active participation of civil society.
The book first shows the conceptualisation of the process of self-interest as operating for one’s own benefit and its inclusion in the orthodox economic model. In Chapter 2 it then displays some of the logical/formal and experimental limits of the axiomatic economics model to discover the possibility of building bridges between theoretical modelling and factual validation.  Chapter 3 demonstrates the fragility of a rationality model based on the paradigmatic figure of homo oeconomicus.  Chapter 4 reflects on the critical process that has identified reciprocity as a determining factor for human cooperation, turning this behaviour into a paradox in which the lack of a reasonable explanation from the selfish perspective becomes inconsistent in the predominant economic theory. Chapter 5 is from a moral point of view it describes and criticises the different approaches to reciprocity observed by sociologists, biologists, psychologists and economists. Chapter 6 analyses three mutual recognition proposals as possible foundations for human cooperation, highlighting one of them –cordial recognition, developed by Cortina– because it is more closely related to studies of reciprocity, particularly the most recent contributions from the neurosciences. Chapter 7 proposes cordial reciprocity as a horizon of meaning for the various approaches to reciprocity observed. Chapter 8 explores the possible emergence and development of cordial goods, a type of relational and communicative good that enables joint actions to take place in different contexts of human activity. Chapter 9 analyses the application and implementation of cordial reciprocity at the macro, meso and micro levels of the economy. And finally, it proposes guidelines for designing a monitoring and compliance system which, based on the communication, storage and processing of big data and the committed participation of stakeholders, offers businesses the possibility of inspecting their underlying dimensions of morality, emotions and responsibility.