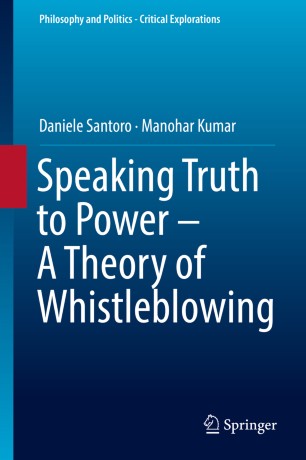 Speaking Truth to Power - A Theory of Whistleblowing

Whistleblowing is the public disclosure of information with the purpose of revealing wrongdoings and abuses of power that harm the public interest. This book presents a comprehensive theory of whistleblowing: it defines the concept, reconstructs its origins, discusses it within the current ethical debate, and elaborates a justification of unauthorized disclosures. Its normative proposal is based on three criteria of permissibility: the communicative constraints, the intent, and the public interest conditions. The book distinguishes between two forms of whistleblowing, civic and political, showing how they apply in the contexts of corruption and government secrecy.

The book articulates a conception of public interest as a claim concerning the presumptive interest of the public. It argues that public interest is defined in opposition to corporate powers and its core content identified by the rights that are all-purposive for the distribution of social benefits.

A crucial part of the proposal is dedicated to the impact of security policies and government secrecy on civil liberties. It argues that unrestrained secrecy limits the epistemic entitlement of citizens to know under which conditions their rights are limited by security policies and corporate interests. When citizens are denied the right to assess when these policies are prejudicial to their freedoms, whistleblowing represents a legitimate form of political agency that safeguards the fundamental rights of citizens against the threat of unrestrained secrecy by government power.

Finally, the book contributes to shifting the attention of democratic theory from the procedures of consent formation to the mechanisms that guarantee the expression of dissent. It argues that whistleblowing is a distinctive form of civil dissent that contributes to the demands of institutional transparency in constitutional democracies and explores the idea that the way institutions are responsive to dissent determines the robustness of democracy, and ultimately, its legitimacy. What place dissenters have within a society, whether they enjoy personal safety, legal protection, and safe channels for their disclosure, are hallmarks of a good democracy, and of its sense of justice.