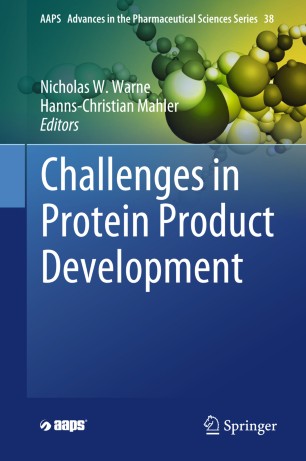 In this volume, the authors discuss the many significant challenges currently faced in biotechnology dosage form development, providing guidance, shared experience and thoughtful reflection on how best to address these potential concerns. As the field of therapeutic recombinant therapeutic proteins enters its fourth decade and the market for biopharmaceuticals becomes increasingly competitive, companies are increasingly dedicating resources to develop innovative biopharmaceuticals to address unmet medical needs. Often, the pharmaceutical development scientist is encountering challenging pharmaceutical properties of a given protein or by the demands placed on the product by stability, manufacturing and preclinical or clinical expectations, as well as the evolving regulatory expectations and landscape. Further, there have been new findings that require close assessment, as for example those related to excipient quality, processing, viscosity and device compatibility and administration, solubility and opalescence and container-closure selection. The literature varies widely in its discussion of these critical elements and consensus does not exist. This topic is receiving a great deal of attention within the biotechnology industry as well as with academic researchers and regulatory agencies globally. Therefore, this book is of interest for business leaders, researchers, formulation and process development scientists, analytical scientists, QA and QC officers, regulatory staff, manufacturing leaders and regulators active in the pharmaceutical and biotech industry, and expert reviewers in regulatory agencies.

Nicholas W. Warne is currently Senior Director of Formulations and Drug Product Process Development at Pfizer.  Dr. Warne has 28 years of industrial experience focusing on biologics formulation development, dosage form design and manufacturing process development.  He and his team have been fortunate to have contributed to the licensure of 10 biologics including clotting factors, growth proteins, mabs, vaccines and ADCs.  Dr. Warne holds numerous protein formulation patents and, with his group, has made over 100 presentations at national meetings and in journals.  Prior to his position at Pfizer, Dr. Warne had positions of increasing responsibility at Wyeth and Genetics Institute, and has been based in Andover, Massachusetts.

Dr. Warne received his PhD in Chemistry from Purdue University under the guidance of Professor Michael Laskowski Jr. He received his BS in Biochemistry, with Distinction in Research, from the University of Rochester.

Hanns-Christian Mahler. Since September 2015, Dr. Mahler is leading the Drug Product services organization at Lonza AG, a leading service provider for the Pharma and Biotech industry. Prior this position, he led the department Pharmaceutical Development & Supplies, Biologics EU at Roche, Basel, Switzerland from 2010 to 2015 and as Head of Formulation R&D Biologics, Roche, Basel, from 2005 to 2010. From 2000-2005, Dr. Mahler was working at Merck KGaA, Darmstadt, Germany as Principal Formulation Scientist, Lab Manager for Protein Formulation Development and Clinical Trial Manufacturing and CMC Team leader for Erbitux during its submission and launch phase.

Dr. Mahler studied Pharmacy at the University of Mainz, Germany, holds in Ph.D. in Toxicology from the Institute of Pharmacy, University of Mainz and Pharmacist specialization degrees in Toxicology & Ecology and Pharmaceutical Technology. He was further trained in Economy and Marketing. Dr. Mahler obtained his venia legendi (german Habilitation) from the University of Frankfurt/Germany in 2010 and is adjunct faculty and lecturer at the universities of Frankfurt (Germany), and Basel (Switzerland). He was elected an AAPS Fellow in November 2013, nominated extraordinary Professor for Pharmaceutical Technology in November 2015 and received the PDA Distinguished Service Award in 2018.