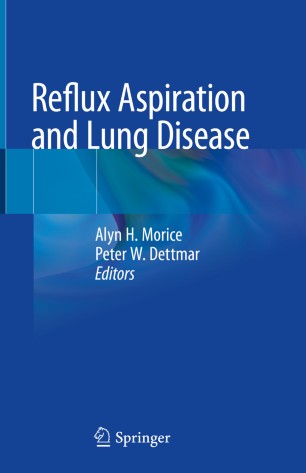 This book is about the interface between reflux and the respiratory tract.  Reflux is an important factor in many different lung diseases. The pathological basis of reflux has recently undergone major changes in our understanding based on improved diagnostic technology. Readers will learn about how reflux impacts on many common  lung conditions. Special circumstances such as eosinophilic inflammation in relation to asthma, cough, and eosinophilic bronchitis will be highlighted. Particular attention is also given to previously unrecognised role of non-acid "airway" reflux. Additionally, pharmacological, surgical and behavioural techniques for diagnostic and  treatment are explored witin these chapters

This book offers a comprehensive overview of various research areas in reflux in relation to airways disease, since currently there is no  summary of how the different but overlapping areas impacted by reflux affect the respiratory tract. It will be of great interest to respiratory physicians, otorhinolaryngologists, and gastroenterologists.

Professor Alyn Morice was trained at Cambridge University with the clinical attachment at St George’s Hospital, London.  Having obtained his MRCP, he undertook research in asthma at St Mary’s Hospital, London studying the clinical pharmacology of airway nerves.  During this time, a patient presented with an unexplained cough which was the first observation of ACE inhibitor cough and subsequently led to the demonstration of the Cough Hypersensitivity Syndrome in a Lancet paper of 1987.  Professor Morice was then appointed Lecturer in Clinical Pharmacology at Cambridge University and started a lifelong interest in cough challenge and its role in dissecting the physiology of airway nerves.  Appointed as Senior Lecturer and then Reader at the University of Sheffield, Professor Morice continued to study both the in vitro and in vivo pharmacology of the airway and pulmonary nerves.  He founded the first dedicated Cough Clinic in the United Kingdom, which continues to see over 400 new patients per annum and has a national referral pattern.

Professor Morice moved to Hull in 1998 to take up the Foundation Chair in Respiratory Medicine.  The aetiology of chronic cough was established by the development of the Hull Airways Reflux Questionnaire; a validated instrument demonstrating that cough hypersensitivity is usually caused by aspiration of gaseous non acid reflux.  The technique of high resolution oesophageal manometry has revolutionised our understanding of the pathophysiology basis of airway reflux.

No less than five new drugs are currently in development and being studied in our Clinical Trials Unit.  The importance of reflux, aspiration and lung disease has reached a zenith.

Professor Peter Dettmar is the former global Research and Development Director - Gastrointestinals for Reckitt Benckiser Healthcare (UK) Limited with extensive experience in running product development programs and clinical trials and over thirty five years’ experience of the pharmaceutical industry.  He has an Honorary Professorship  with the School of Pharmaceutical Sciences University of Nottingham, UK, and was Adjunct Professor and Director of Research at the Centre for Voice and Swallowing Disorders, Department of Otolaryngology, Wake Forest University Baptist Medical Centre, Winston-Salem, USA. He has a PhD. in pharmacology from the University of Bradford, UK and is a named inventor on over 40 patents, has supervised more than 70 successful PhD. studentships and has authored or co-authored over 530 scientific publications. He has a special interest in reflux disease, pepsin, bile acids, mucosal protection, salivary mucins, bioadhesion, H. pylori, nutrition, dietary fibres/functional foods, Irritable Bowel Syndrome (IBS), Inflammatory Bowel Disease (IBD), polymers/biopolymers, cell biology and has established international research and clinical networks that are core to research in these areas. He has organised national and international conferences and workshops including a series of meetings on reflux disease and symposia on human pepsin and gives numerous national and international lectures. He has established and is the Managing Director of Technostics Limited and RD Biomed Limited two innovative pharmaceutical development and diagnostic companies based at Castle Hill Hospital in Cottingham , East Yorkshire, UK.