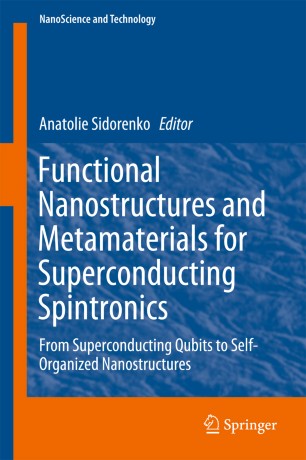 From Superconducting Qubits to Self-Organized Nanostructures

This book demonstrates how the new phenomena in the nanometer scale serve as the basis for the invention and development of novel nanoelectronic devices and how they are used for engineering nanostructures and metamaterials with unusual properties. It discusses topics such as  superconducting spin-valve effect and thermal spin transport, which are important for developing spintronics; fabrication of nanostructures from antagonistic materials like ferromagnets and superconductors, which lead to a novel non-conventional  FFLO-superconducting state; calculations of functional nanostructures with an exotic triplet superconductivity, which are the basis for novel nanoelectronic devices, such as superconducting spin valve, thin-film superconducting quantum interference devices (SQUIDs) and memory-elements (MRAM). Starting with theoretical chapters about triplet superconductivity, the book then introduces new ideas and approaches in the fundamentals of superconducting electronics. It presents various quantum devices based on the new theoretical approaches, demonstrating the enormous potential of the electronics of 21st century - spintronics.The book is useful for a broad audience, including researchers, engineers, PhD graduates, students and others wanting to gain insights into the frontiers of nanoscience.

Anatolie Sidorenko obtained his doctoral degree in 1979 at the Institute for Low Temperatures of Ukrainian Academy of Sciences, Kharkov, and  habilitation degree  in 1991 at the Institute of Applied Physics of Moldavian Academy of Sciences, Chisinau. He is currently Director of the Institute of Electronic Engineering and Nanotechnologies, Chisinau, Moldova. His research interest focus on properties of low dimensional systems, layered nanostructures and hybrids uperconductor/ferromagnet with emphasis on spintronics, superconductivity, transport and magnetic phenomena in functional nanostructures. Anatolie Sidorenko has edited the book “Fundamentals of Superconducting Nanoelectronics” (Springer, 2011) and co-edited “Nanoscale Phenomena – Fundamentals and Applications” (Springer, 2009), he is associate editor of the Beilstein Journal of Nanotechnology.  Anatolie Sidorenko is a member of the Moldavian Academy of Sciences since 2012 and DPG member since 2001.