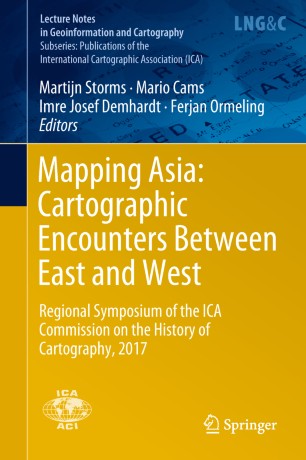 Regional Symposium of the ICA Commission on the History of Cartography, 2017

This proceedings book presents the first-ever cross-disciplinary analysis of 16th–20th century South, East, and Southeast Asian cartography. The central theme of the conference was the mutual influence of Western and Asian cartographic traditions, and the focus was on points of contact between Western and Asian cartographic history. Geographically, the topics were limited to South Asia, East Asia and Southeast Asia, with special attention to India, China, Japan, Korea and Indonesia. Topics addressed included Asia’s place in the world, the Dutch East India Company, toponymy, Philipp Franz von Siebold, maritime cartography, missionary mapping and cadastral mapping.

Martijn Storms (Arnhem, 1978) studied human geography and planning at Utrecht University, where he specialised in GIS and cartography. He is the curator of maps and atlases at Leiden University Libraries and project coordinator for Koeman’s Atlantes Neerlandici at Brill publishers. Besides, he is a member of the editing board of Caert-Thresoor, the Dutch journal on the history of cartography and national representative of the Netherlands for Imago Mundi. He was symposium director of the Mapping Asia symposium, reflected in this volume.

Mario Cams obtained his PhD from the University of Leuven in 2015 and is currently Assistant Professor at the University of Macau’s Department of History. He is the author of Companions in Geography: East-West Collaboration in the Mapping of Qing China (c. 1685–1735) (Leiden/Boston: Brill, 2017), in which he revisits the early 18th century surveying and mapping of Qing China, one of the largest cartographic endeavors of the early modern world. His current research continues to focus on Qing cartography, as well as on exchanges in maps and geographies between Europe and East Asia before the 20th century.

Ferjan Ormeling held the chair of cartography at Utrecht University 1985–2010 and since then is part of the Explokart research group at the University of Amsterdam. His research focuses on atlas cartography, toponymy and the cartographic history of the Indonesian archipelago, either separately or in combination. He was one of the editors of the national atlases of the Netherlands and contributed to the Comprehensive Atlas of the Dutch East India Company. From 2007–2017 he was vice-chair of the United Nations Group of Experts on Geographical Names.

“The essays are academic articles intended for academic use by university professors, researchers, or students. That said, for those academicians with an interest in Eastern and Western cartographic history, this book is an invaluable resource.” (Jasmin Khangura, Cartographic Perspectives, November 19, 2019)
Buy options