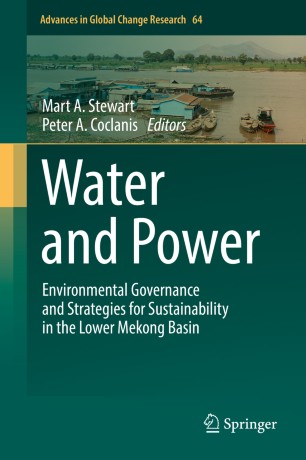 Environmental Governance and Strategies for Sustainability in the Lower Mekong Basin

This book brings together a talented international group of scholars, policy practitioners, and NGO professionals that explores a range of issues relating to environmental, developmental, and governing challenges on the Mekong, one of the world’s  greatest rivers and, alas, one of the most endangered.

The book is divided into three sections devoted in turn to historical perspectives on the Lower Mekong Basin. Issues relate to livelihood strategies, environmental threats, and adaptation strategies; and various aspects of river governance, with individual authors treating questions of governance at different levels of refraction and in different registers. The result is a fresh and innovative collection of essays, which, taken together, provide much-needed new perspectives on some of the most important and seemingly intractable environmental and development issues in contemporary Asia.

Mart A. Stewart: teaches a full slate of courses in environmental and cultural history at Western Washington University, is a professor in the Department of History, and an affiliate professor in Huxley College of the Environment and in the Fairhaven College American Cultural Studies Program at Western. He has taught courses in environmental history or American Studies in two dozen venues in universities in the U.S., Vietnam, Cambodia, and Austria. In 2009, he was the Thomson Distinguished Visiting Chair in Environmental Studies at Davidson College in North Carolina and in 2014 received the Organization of American Historians China Residency Award to support teaching a research seminar in environmental history for Chinese faculty and graduate students in Beijing. He is the author of “What Nature Suffers to Groe”: Life, Labor, and Landscape on the Georgia Coast, 1680-1920 (Georgia, 1996; 2003), the winner of the Bell Book Award from the Georgia Historical Society, and many essays and articles in academic journals and the popular press. He was the co-editor of Environmental Change and Agricultural Sustainability in the Mekong Delta (Springer Scientific, 2011).

Peter A. Coclanis is Albert R. Newsome Distinguished Professor of History and Director of the Global Research Institute at UNC-Chapel Hill. He served as Associate Dean for General Education at UNC from 1993 to 1998, and chaired the History Department there from July 1, 1998 through November 30, 2003. From December 1, 2003 until November 30, 2009 he served as UNC’s first Associate Provost for International Affairs. He is also an adjunct professor in Economics, a Faculty Affiliate in the Department of Asian Studies, and a Faculty Affiliate in the Curriculum for Peace, War, and Defense. Coclanis has published widely and is the author of The Shadow of a Dream: Economic Life and Death in the South Carolina Low Country, 1670-1920 (Oxford University Press, 1989), which won the Allan Nevins Prize of the Society of American Historians, and co-author with David L. Carlton of The South, the Nation, and the World: Perspectives on Southern Economic Development (University of Virginia Press, 2003). In summer 2006 his book, Time’s Arrow, Time’s Cycle: Globalization in Southeast Asia over la Longue Durée was published by the Institute of Southeast Asian Studies (Singapore), and in May 2011 a book he co-edited with Mart Stewart entitled The Mekong Delta: Environmental Change and Agricultural Sustainability was published by Springer.  He recently co-edited Rice: Global Networks and New Histories (New York and Cambridge: Cambridge University Press, 2015)) and co-authored a book, Plantation Kingdom: The American South and Its Global Commodities (Baltimore and London: The Johns Hopkins University Press 2016)  early in 2016.