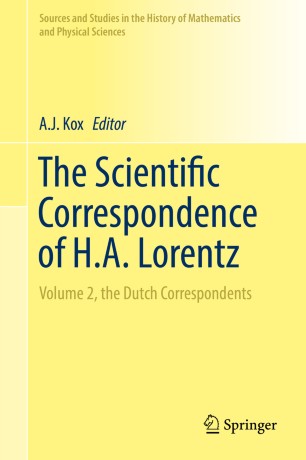 The Scientific Correspondence of H.A. Lorentz

This is the second and final volume of Dutch physicist Hendrik Antoon Lorentz's scientific correspondence with Dutch colleagues, including Pieter Zeeman and Paul Ehrenfest. These 294 letters cover multiple subjects, ranging from pure mathematics to magneto-optics and wave mechanics. They reveal much about their author, including Lorentz's surprisingly active involvement in experimental matters in the first decades of his career. Letters are also devoted to general relativity, Lorentz's 1908 lecture on radiation theory, and his receipt of the Nobel Prize along with Zeeman in 1902.

The letters are presented in their original language; Dutch originals are accompanied by English translations.

A concise biography of Lorentz is also included.