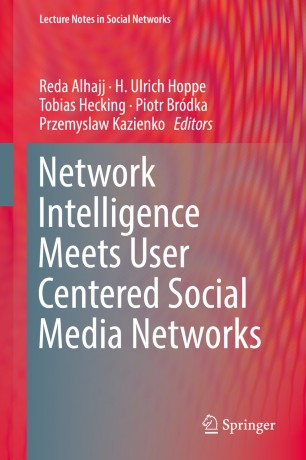 This edited volume presents advances in modeling and computational analysis techniques related to networks and online communities. It contains the best papers of notable scientists from the 4th European Network Intelligence Conference (ENIC 2017) that have been peer reviewed and expanded into the present format. The aim of this text is to share knowledge and experience as well as to present recent advances in the field.  The book is a nice mix of basic research topics such as data-based centrality measures along with intriguing applied topics, for example, interaction decay patterns in online social communities. This book will appeal to students, professors, and researchers working in the fields of data science, computational social science, and social network analysis.

Reda Alhajj is a professor in the Department of Computer Science at the University of Calgary. He published over 450 papers in refereed international journals and conferences. He served on the program committee of several international conferences. He is founding editor in chief of the Springer premier journal “Social Networks Analysis and Mining”, founding editor-in-chief of Springer Series “Lecture Notes on Social Networks”, founding editor-in-chief of Springer journal “Network Modeling Analysis in Health Informatics and Bioinformatics”, founding co-editor-in-chief of Springer “Encyclopedia on Social Networks Analysis and Mining”, founding steering chair of the flagship conference “IEEE/ACM International Conference on Advances in Social Network Analysis and Mining”, and three accompanying symposiums FAB, FOSINT-SI and HI-BI-BI. Dr. Alhajj's research concentrates primarily on data science from management to integration and analysis. Current research efforts include: (1) data management and mining, (2) social network analysis with applications in sociology, computational biology and bioinformatics, homeland security, etc., (3) sequence analysis with emphasis on domains like financial, weather, traffic, energy, etc. Dr. Alhajj's is proud to have a number of successful teams, including SANO who ranked first in the Microsoft Imagine Cup Competition in Canada and received KFC Innovation Award in the World Finals held in Russia, TRAK who ranked in the top 15 teams in the open data analysis competition in Canada, Funiverse who ranked first in Microsoft Imagine Cup Competition in Canada.

Dr. H. Ulrich Hoppe holds a full professorship in Computer Science dedicated to the area of “Learning and Knowledge Technologies” at the University of Duisburg-Essen (Germany). After his PhD on interactive programming in mathematics education in 1984, Ulrich Hoppe has worked for about ten years in the field of intelligent user interfaces and cognitive models in Human-Computer Interaction, before he re-focused his research on intelligent support in educational systems and distributed collaborative environments in 1995. With his COLLIDE Research Group he has participated in more than ten European projects on Technology-Enhanced Learning. He was one of the initiators of the European Network of Excellence Kaleidoscope (2004-07). Currently he is engaged in as a PI in a Research Training Group on “User Centred Social Media” funded by the German National Science Foundation since 2015. In his current research he is particularly interested in combining network analysis techniques with other data mining methods in the context of studying and supporting online learning and knowledge building communities.

Dr. Tobias Hecking received his PhD in Computer Science in 2017 and is currently working as a postdoctoral researcher in the COLLIDE research group located in the Department of Computer Science of the University of Duisburg-Essen.
His research focuses on advanced network analysis techniques and their applications especially in the domain of learning and
knowledge creating communities. In this context he authored several research papers in the thematic overlap of the fields of social network analysis and mining
and learning analytics. Since 2017 Tobias Hecking is also the coordinator of the research training group "User-centred Social Media" founded by the German
Research Foundation (DFG), which constitutes an interdisciplinary research and qualification environment for excelent young researchers
with backgrounds in computer science and cognitive sciences.

Dr. Piotr Bródka is an assistant professor of Computer Science at the Department of Computational Intelligence, Wroclaw University of Science and Technology. He received his Ph.D. degree from Wroclaw University of Technology in 2012. Dr. Piotr Bródka was a visiting scholar at Stanford University in 2013. He has authored over 70 scholarly and research articles on a variety of areas related to Network Science, focusing on the extraction and dynamics of communities within social networks, spreading processes in complex networks and the analysis of multilayer networks. In 2015 Dr. Piotr Bródka received a 3 year scholarship for the best young scientists awarded by Polish Ministry of Science and Higher Education.

Przemysław Kazienko, Ph.D. is a full professor and leader of ENGINE - the European Centre for Data Science at Wroclaw University of Science and Technology, Poland. He authored over 200 research papers, including 35 in journals with impact factor covering a variety of topics related to social network analysis, complex networks, spread of influence, collective classification, machine learning, sentiment analysis, DSS in medicine, finances and telecommunication, knowledge management, collaborative systems, data mining, recommender systems, information retrieval, and data security. He gave 16 keynote/invited talks for international audience, served as a co-chair of over 20 international scientific conferences and workshops and also led over 50 research project including European (FP7, H2020) and industrial ones. He is an IEEE Senior Member, a member of the Editorial Board of Social Network Analysis and Mining, Social Informatics, International Journal of Knowledge Society Research, International Journal of Human Capital. He is also on the board of Network Science Society and the leader of its Polish Chapter.