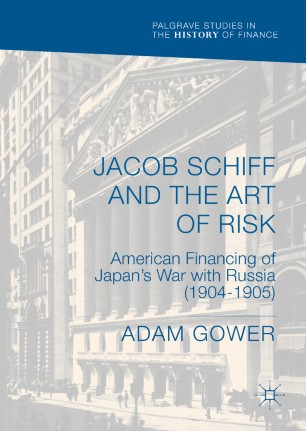 “A fascinating, wholly new, account of the emergence of Japan as a major player in the global economy and politics in the early twentieth century, and New York financier Jacob Schiff's role in funding it, while he boosted the US challenge to the City of London's dominance in world finance.”

“Jacob Schiff and the Art of Risk showcases the fascinating stories and insights of how international banking worked in the early 20th century and how it still works today. It uniquely illustrates how one banker shifted the paradigm and opened the door for New York to replace London as the center of international finance.”

“Jacob Schiff, a prominent New York Jewish banker, assembled the loans that Japan required for its war with Russia in 1905.  This book covers a fascinating tale of a great Wall Street bank in the setting of Manhattan society, the global expansion of American finance, and the rise of modern Japan.”

Adam Gower, founder, GowerCrowd, is a 30-year real estate development and finance veteran who has held senior management positions at some of the largest public and private companies and institutions in the world.  He is a highly sought-after expert in crowdfunding investment and finance, providing advisory services to sponsors raising capital. He has taught university graduating students the only fully accredited course in the world on how to invest in real estate crowdfunded syndications. He hosts an internationally acclaimed podcast series, The Real Estate Crowdfunding Show, Syndication in the Digital Age. Based on over $1.5 billion of transactional experience, Adam has developed a series of online real estate courses that teach a new generation of high net worth individuals and families how to prudently invest in real estate for income while prioritizing principal preservation. You can find out more about Adam at GowerCrowd.com.