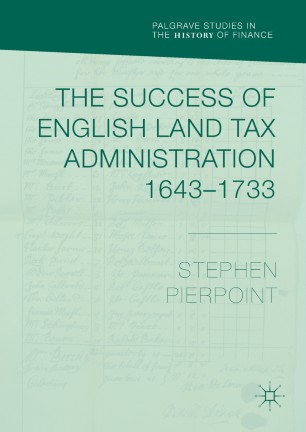 This book provides a thorough review of early English land taxes of the seventeenth and early eighteenth centuries. It is a polemical work which is critical of the institutional English state narratives including Brewer’s ‘Sinews of Power’ and North and Weingast’s ‘credible commitment’ and some established works in the field particularly Ward’s ‘The English Land Tax in the Eighteenth-Century’ which is subject to a highly detailed critique. The book proposes that although this was a time of tension, with an English population divided by political and religious affiliations, unprecedented amounts of taxation were still collected. This was achieved by ceding immediate process ownership to local governors whilst arming them with clear success criteria, well-designed processes and innovative legislation targeted on a growing and commercialized economy. An important development was the state’s increasing ability to coordinate tax-gathering activities across the country. This book will be of interest to financial historians, academics, and researchers.

Stephen Pierpoint is a former tax manager in the oil industry and tax inspector. He is currently an Honorary Research Associate affiliated to the Bartlett School, University College London.  His current book is based on his Cambridge PhD thesis, but he has wide interests and has also written on the British Neolithic and Bronze Age.