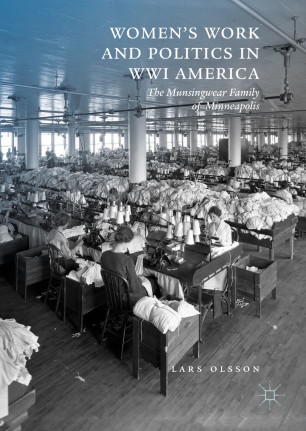 The Munsingwear Family of Minneapolis

By World War I, the Northwestern Knitting Company was the largest workplace for gainfully employed women in Minnesota and the largest garment factory in the United States. Lars Olsson investigates the interplay of class, gender, marital status, ethnicity, and race in the labor relations at the factory, illuminating the lives of the women who worked there. Representing thirty nationalities, particularly Scandinavian, the women worked long hours for low pay in roles that were strictly divided along ethnic and gendered lines, while the company directors and stockholders made enormous profits off of their labor. Management developed paternal strategies to bind the workers to the company and preempt unionization, including bonus programs, minstrel shows, and a pioneering industrial welfare program. With the US entry into the war, the company was contracted to produce underwear for soldiers, and management expanded the metaphor of "the Munsingwear Family" to construct not just company loyalty, but national loyalty. This book sheds new light on women's labor in WWI and the lives of textile workers in the United States.

“Lars Olsson has crafted a unique analysis that focuses on intersections of class, gender, ethnicity, race, and the experience of work at the Northwestern Knitting Company. Women's Work and Politics in WWI America contends that, in their manufacture of underwear for the troops, women workers directly supported America’s cause by clothing its heroes during wartime—a motto encouraged through heavy-handed paternalism that preached loyalty through hard work. A must-read for scholars and students interested in Progressivism, women’s work during WWI, and labor history.” (Erika K. Jackson, Associate Professor of History, Colorado Mesa University, USA, and author of Scandinavians in Chicago: The Origins of White Privilege in Modern America)
Buy options