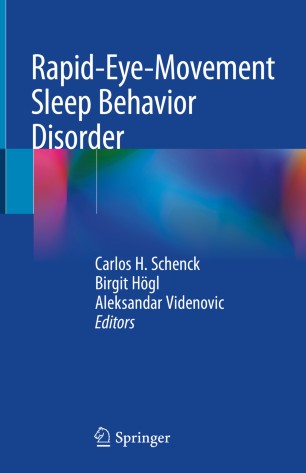 This book describes a sleep disorder belonging to the category of parasomnias (i.e. the sleep behavioral and experiential disorders) characterized by abnormal vocal and motor behaviors in the context of vivid dreams and loss of the customary muscle atonia during the stage of sleep called REM sleep. REM-atonia - one of the defining features of REM sleep, along with rapid-eye-movements and a highly activated brain state - serves a protective function, preventing the dreamer from acting-out dreams and becoming injured. REM sleep behavior disorder (RBD) was first described in 1986 by Schenck and colleagues; since then the understanding of the condition has increased exponentially, also pointing out its strong association with the development of neurodegenerative disorders characterized by alpha synuclein deposition, such as Parkinson’s disease, Dementia with Lewy bodies, and Multiple System Atrophy. Furthermore, RBD is now considered one of the earliest markers of ongoing alpha synuclein neurodegeneration, and provides a window of opportunity for testing disease modifying therapies that may slow down or halt the progression of these disorders for which there is currently no cure.

Additionally, RBD is today known to be present in more than 50% of patients with narcolepsy-cataplexy, and can also be triggered by the most commonly prescribed antidepressant medications (e.g. SSRIs, venlafaxine). RBD has been documented as occurring, with variable frequency, with virtually every category of neurologic disease and has also helped expand the field of dream research.

The volume Editors have pioneered scientific and clinical advances in the field and, partnering with leading sleep clinicians and researchers on this book, have produced an invaluable guide to specialists in sleep medicine, neurology, psychiatry and psychology. There are also strong contributions in this book by leading basic science researchers, and so this book should also appeal to neuroscientists. As stated in the book, "RBD is situated at a strategic and busy crossroads of sleep medicine and the neurosciences. RBD offers great breadth and depth of research opportunities, including extensive inter-disciplinary and multinational research opportunities...RBD is an 'experiment of Nature' in which knowledge from the study of motor-behavioral dyscontrol during REM sleep, with dream-enactment, has cast a broad and powerful light on a multitude of Central Nervous System disturbances, their evolution, and their comorbidities."