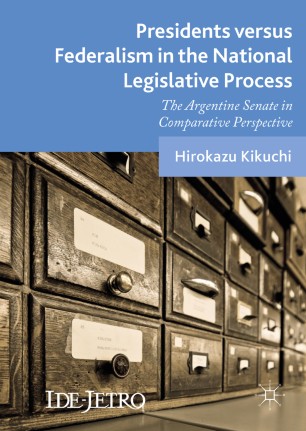 Presidents versus Federalism in the National Legislative Process

The Argentine Senate in Comparative Perspective

This book rethinks gubernatorial effects on national politics using the case of the Argentine Senate. Simultaneously analyzing senatorial behavior in committees and on the floor, Kikuchi argues that senators strategically change their actions according to stages in the legislative process, and that longstanding governors may influence national politics, causing their senators to shelve unwanted presidential bills at the committee stage. He explains senatorial behavior focusing on varieties in the combinations of principals, whose preferences senators must take into account, and shows that legislators under the same electoral system do not necessarily behave in the same way. He also demonstrates that this argument can be applied to cases from other federal countries, such as Brazil and Mexico. Based on rich qualitative evidence and quantitative data, the book offers a theoretical framework for understanding how some governors may influence national politics.