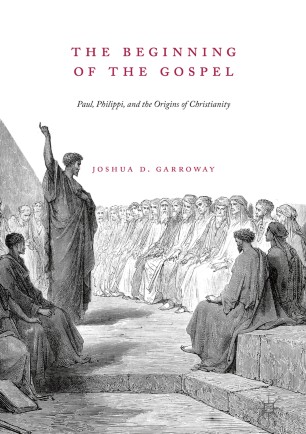 The Beginning of the Gospel

Paul, Philippi, and the Origins of Christianity

In this innovative study, Joshua D. Garroway offers a revised account of the origin of the all-important Christian word “gospel,”  yielding significant new insights into the development of early Christian history and literature. Long thought to have originated on the lips of Jesus or his disciples, “gospel” was in fact coined by Paul midway through his career to describe his controversial new interpretation of Jesus’ death and resurrection. For nearly a decade after the crucifixion, the thoroughly Jewish Jesus movement demanded circumcision and Law observance from Gentile converts. Only in the early 40s did Paul arrive at the belief that such observance was no longer necessary, an insight he dubbed “the gospel,” or good news. The remainder of Paul’s career featured clashes with authorities over the legitimacy of the gospel, debates that continued after his death in the writings of Mark, Matthew, and Luke-Acts. These writings obscured the original context of the gospel, however, and in time the word lost its specific association with Paul and his scandalous notion of salvation outside the Law.

Joshua D. Garroway is Associate Professor of Early Christianity and the Second Commonwealth at Hebrew Union College-Jewish Institute of Religion. His first book, Paul’s Gentile-Jews: Neither Jew nor Gentile, but Both (Palgrave 2012) explores the ways in which Paul's epistle to the Romans constructs Jewish identity, and the role played by this construction in the ensuing emergence of Christianity.