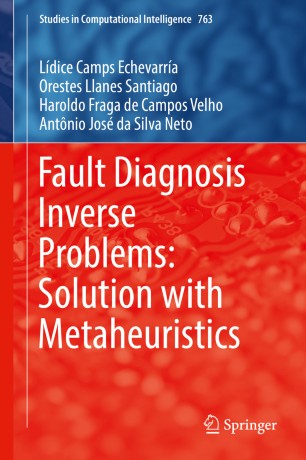 This book presents a methodology based on inverse problems for use in solutions for fault diagnosis in control systems, combining tools from mathematics, physics, computational and mathematical modeling, optimization and computational intelligence. This methodology, known as fault diagnosis – inverse problem methodology or FD-IPM, unifies the results of several years of work of the authors in the fields of fault detection and isolation (FDI), inverse problems and optimization. The book clearly and systematically presents the main ideas, concepts and results obtained in recent years. By formulating fault diagnosis as an inverse problem, and by solving it using metaheuristics, the authors offer researchers and students a fresh, interdisciplinary perspective for problem solving in these fields. Graduate courses in engineering, applied mathematics and computing also benefit from this work.

Lídice Camps Echeverría holds bachelor’s and master’s degrees in Mathematics at Universidad de La Habana in 2006 and 2009 respectively.  She obtained the PhD in Engineering (2012), with minor in Automatics and Computer Science, at Universidad Tecnológica de La Habana José Antonio Echeverría, CUJAE, Cuba. Since 2006 she has pursued research at the Technological University of La Habana “José Antonio Echeverria” - CUJAE, Cuba. In 2011-2012, she undertook research at the National Institute for Space Research – INPE, Brazil, and at the Polytechnic Institute of Rio de Janeiro State University (IPRJ-UERJ). Her fields of interest include fault diagnosis and soft computing, with a focus on metaheuristics for optimization.
Orestes Llanes Santiago graduated from the Instituto Superior Politécnico “José Antonio Echeverría” – CUJAE, Cuba, in 1981. From 1989 to 1994, he studied at the Universidad de Los Andes, Venezuela, where he obtained a master’s degree in Control Engineering (1990) and a PhD in Applied Sciences (1994). He is currently a full professor and researcher at the Automation and Computing Department of the Faculty of Automation and Biomedical Electrical Engineering at the CUJAE. He is titular member of the  Academic of Sciences  of Cuba. His areas of interest are fault diagnosis in industrial systems, nonlinear control and computational intelligence with applications to control.
Haroldo Fraga de Campos Velho has a bachelor’s degree in Chemical Engineering from the Pontifical Catholic University of Rio Grande do Sul (1983), Brazil, and a master’s degree (1988) and a PhD (1992) in Mechanical Engineering, with a focus on Nuclear Reactor Physics and Computational Fluid Dynamics, respectively, both from the Federal University of Rio Grande do Sul. He has been a researcher at the Computing and Applied Mathematics Laboratory of the National Institute for Space Research (INPE), Brazil, since 1988, and a full researcher since 2009. His work focuses on inverse problems, data assimilation, numerical methods and artificial neural networks.
Antônio José da Silva Neto holds a bachelor’s degree in Mechanical and Nuclear Engineering (1983) and a master’s degree in Nuclear Engineering (1989) from the Federal University of Rio de Janeiro, and a PhD in Mechanical Engineering from North Carolina State University (1993). He worked for the Brazilian National Nuclear Energy Commission (1984-1986), and Promon Engenharia (1986-1997). In 1997 he joined the Polytechnic Institute of Rio de Janeiro State University, where he has been a professor since 2013. His research interests are in two main areas: mechanical engineering, with a focus on heat transfer, and applied and computational mathematics, with a focus on numerical methods and inverse problems.

“The book is written by a group of authors, all of them well-known for their research works in the field of model based fault diagnosis and inverse problems, metaheuristic and optimization problems. … The book is complete, eminently readable, and is accessible to novices and experts working in the above-mentioned fields.” (Anatoly Martynyuk, zbMath 1414.93103, 2019)
Buy options