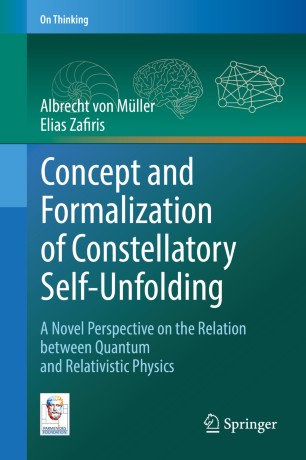 Concept and Formalization of Constellatory Self-Unfolding

A Novel Perspective on the Relation between Quantum and Relativistic Physics

Part of the On Thinking book series (ONTHINKING)

This volume develops a fundamentally different categorical framework for conceptualizing time and reality. The actual taking place of reality is conceived as a “constellatory self-unfolding” characterized by strong self-referentiality and occurring in the primordial form of time, the not yet sequentially structured “time-space of the present.” Concomitantly, both the sequentially ordered aspect of time and the factual aspect of reality appear as emergent phenomena that come into being only after reality has actually taken place. In this new framework, time functions as an ontophainetic [H1] platform, i.e., as the stage on which reality can first occur. Events are merely the “tracks” that the actual taking place of reality leaves behind on the co-emergent “canvas’’ of local spacetime.

The view of time proposed here is particularly relevant to the recent debate over the “ER=EPR” conjecture targeting the relation between quantum physics and general relativity theory. The novelty of this radically different framework is that it allows quantum reduction and singularities to be addressed as inverse transitions into and out of the factual layer of reality: In quantum physical state reduction, reality “gains” the chrono-ontological format of facticity, and the sequential aspect of time becomes applicable. In singularities, by contrast, the opposite happens: Reality loses its local spacetime formation and reverts back to its primordial, pre-local shape – making the use of causality relations, Boolean logic and the dichotomization of subject and object obsolete in the process.

For our understanding of the relation between quantum and relativistic physics, this new view opens up fundamentally new perspectives: Both are legitimate views of time and reality; they simply address very different chrono-ontological portraits, and thus should not lead us to erroneously prefer one view over the other.

The task of the book is to provide a formal framework in which this radically different view of time and reality can be suitably addressed. The mathematical approach is based on the logical and topological features of the Borromean Rings, and draws upon concepts and methods from algebraic and geometric topology – especially the theory of sheaves and links, group theory, logic and information theory in relation to the standard constructions employed in quantum mechanics and general relativity, shedding new light on the problems of their compatibility. The intended audience includes physicists, mathematicians and philosophers with an interest in the conceptual and mathematical foundations of modern physics.