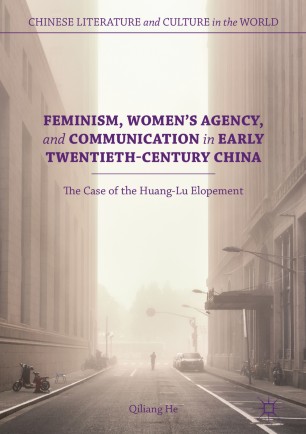 The Case of the Huang-Lu Elopement

Feminism, Women’s Agency, and Communication in Early Twentieth-Century China focuses on a sensational elopement in the Yangzi Delta in the late 1920s to explore how middle- and lower-class members of society gained access to and appropriated otherwise alien and abstract enlightenment theories and idioms about love, marriage, and family. Via a network of communications that connected people of differing socioeconomic and educational backgrounds, non-elite women were empowered to display their new womanhood and thereby exercise their self-activating agency to mount resistance to China’s patriarchal system. Qiliang He’s text also investigates the proliferation of anti-feminist conservatisms in legal practice, scholarly discourses, media, and popular culture in the early Nanjing Decade (1927-1937). Utilizing a framework of interdisciplinary scholarship, this book traverses various fields such as legal history, women’s history, popular culture/media studies, and literary studies to explore urban discourse and communication in 1920s China.

Qiliang He is Associate Professor in History at Illinois State University, USA. He is the author of Gilded Voices: Economics, Politics, and Storytelling in the Yangzi Delta Since 1949 (2012) and numerous articles on cultural history in twentieth-century China. He has also translated three books on Chinese history.

“Going beyond simply an empirical study of elopement and romance in the Nanjing Decade, the author uses this controversial love affair as a prism to examine the urban networks of communication during the time. Through a careful analysis of how various social groups respond to the love affair to generate competing public discourses, the author contends that such a polyphonic and participatory public is made possible by a booming urban popular culture and media networks that also helped to vernacularize the May Fourth-style feminist theories and terms.” (Hui Faye Xiao, Associate Professor of Modern Chinese Literature and Culture, University of Kansas, USA and author of Family Revolution: Marital Strife in Contemporary Chinese Literature and Visual Culture, 2014)

“This is a masterful study of a critical juncture in modern Chinese history.  With the infamous 1928 Huang Huiru-Lu Genrong elopement case as its focus, the book examines the multiple contradictions besetting Chinese society at that time—tradition vs. modernity; the indigenous vs. the foreign; children vs. parents; and women vs. men.  It is, at once, a study of legal history, gender history, social history, and media history that casts new light on the ways in which ordinary people experienced the big changes and big ideas of the times. And scholarly merit aside, it is a terrifically fun read.” (Kathryn Bernhardt, Professor Emerita of History, University of California, Los Angeles, USA)

“He Qiliang gives Suzhou debutante Huang Huairu and Lu Genrong, the family servant with whom she eloped, and their tragic 1928-29 saga of love, prosecution, and death the insightful analysis and sympathetic retelling they have long deserved. Drawing on newspaper and magazine reportage, film, fiction, operatic and tanci performance, He examines the disparate characterizations of contemporaries, who portrayed Huang and Lu according to their particular ideological perspectives, as variously a revolutionary new woman, casualty of female lust, and victim of seduction, in the case of Huang, and a noble lover whose passion surmounted class differences, corrupting cad, and martyr to injustice, in the case of Lu. These sundry depictions made the Huang-Lu affair a contested  allegory for all partisans in the  Republican era cultural war over the power of love, the structure of marriage and the family, and the reformation of the gender system.” (Peter J. Carroll, Associate Professor of History, Northwestern University, USA)