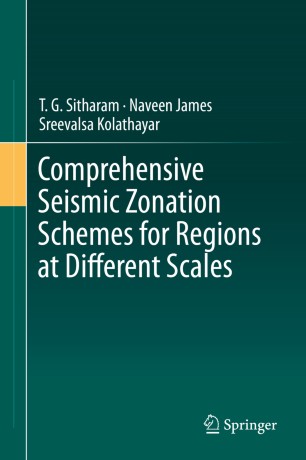 This book reviews and assesses various methodologies for site characterization and site effects estimation to carry out seismic zonation at micro and macro levels. Readers will learn about the suitability of these methodologies for different levels of zoning in order to optimize the resources for carrying out seismic zonation. The Indian sub-continent is highly vulnerable to earthquake hazards, and past studies have focused primarily on the Himalayan region (inter-plate zone) and the northeast region (subduction zone). This book improves understanding of the seismicity in Peninsular India, which also has witnessed earthquakes of sizeable magnitude.

Particular attention is given to the various methodologies for assessing seismic hazards, the scales at which site characterizations are carried out, and optimal methods for zonation practices using site data and hazard indexes. This book will be of use to post-graduates and doctoral students researching seismic zonation, hazard assessment and mitigation, and spatial data in earth sciences.

Prof. Dr. T.G. Sitharam is a  KSIIDC Chair Professor in the area of Energy and Mechanical Sciences and Senior Professor at the Department of Civil Engineering, Indian Institute of Science, Bengaluru (IISc). He was former founder Chairman of the Center for Infrastructure, Sustainable Transport and Urban Planning (CiSTUP) at IISc. He is presently the Chairman of the AICTE South Western Zonal Committee, Regional office at Bengaluru and Vice President of the Indian Society for Earthquake Technology (ISET). He is the founder President of the International Association for Coastal Reservoir Research (IACRR). He was a Visiting Professor at Yamaguchi University, Japan, University of waterloo, Waterloo, ON, Canada; University of Dolhousie, Halifax, Canada;  and ISM Dhanbad, Jharkhand. Sitharam has obtained his BE(Civil Engg) from Govt BDT College of Engineering from Mysore University, India in 1984, Masters in Civil Engineering from Indian Institute of Science, Bangalore in 1986 and Ph.D. in Civil Engineering from University of Waterloo, Waterloo, Ontario, Canada in 1991 in the area of geomechanics. Further he was a Research Scientist  at center for earth sciences and engineering,  University of Texas at Austin, Texas, USA until 1994. Over the last 25 years, he has carried out seismic microzonation of urban centers in India and developed innovative technologies in the area of seismic hazard, liquefaction, fracturing and geotechnical applications, leading to about 500 technical papers, Ten books, four patents, 125 consulting projects and two startup companies. He is the chief editor of two international journals (International Journal of Geotechnical Earthquake Engineering from IGI Global and Journal of Sustainable Urbanization, Planning and Progress (JSUPP) from UDS publishing House, China) in his areas of research. He has guided 30 Ph.D students and presently he has 8 doctoral students with him. He has advised more than 25 post doctoral students and 35 M Tech students.

Dr. Naveen James is an Assistant Professor in the Department of Civil Engineering at the Indian Institute of Technology (IIT), Ropar. He obtained his M.Tech from National Institute of Technology Karnataka (NITK) Surathkal and PhD from Indian Institute of Science (IISc) Bangalore in the area of Geotechnical Engineering. He was formerly at Birla Institute of Technology and Science (BITS) Pilani, Hyderabad Campus as an Assistant Professor. He as also worked as ancatastrophe R&D Specialistat at American International Group Inc.(AIG) in Bangalore. His current research interests include liquefaction, dynamic behavior of soils, seismic hazard assessment and microzonation, site characterization and site response studies, and GIS applications in hazard studies.

Dr. Sreevalsa Kolathayar pursued his M.Tech from IIT Kanpur, PhD from Indian Institute of Science (IISc) and served as International Research Staff at UPC BarcelonaTech Spain. He is presently Asst Professor and Research Coordinator in the Dept of Civil Engg, Amrita Vishwa Vidyapeetham, Coimbatore, India. He served as Chairman of Students Council at IISc and Adviser to Think India, a national forum of students from premier Institutes in India. He has published several research articles focusing on earthquake hazard and risk assessment. Dr. Sreevalsa was featured by The New Indian Express in 2017 and was honored with Edex award: 40 under 40 - South India's Most Inspiring Young Teachers.