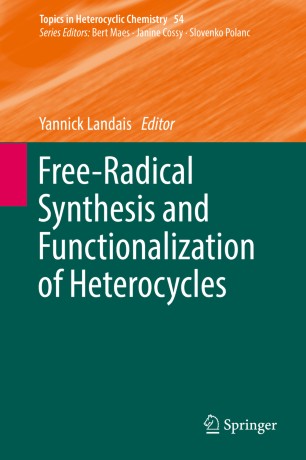 Free-Radical Synthesis and Functionalization of Heterocycles

This volume describes the recent developments in the free-radical mediated synthesis and elaboration of heterocycles. The first chapter, dealing with radical cascade processes illustrates the power and the beauty of radical chemistry with some striking examples of total synthesis of complex natural heterocycles. As organic chemists strive towards sustainability, radical chemistry has recently seen major advances and efforts in this direction, including C-H activation of arenes and unactivated alkyl groups. Photochemical activation, for a long time the preferred mode of activation in radical chemistry has also seen an unexpected revival with the advent of visible light metal- and organocatalyzed photoredox processes. A survey of these emerging areas is provided along with the concepts at the origin of these developments.

The venerable Minisci reaction allows for direct access to functionalized heterocycles. This process has lately seen an interesting renaissance and is discussed in this volume. Addition of heteroatom-centered radicals onto unsaturated systems constitutes another powerful method to construct heterocycles. Examples of such a strategy are proposed along with the formation of various heterocycles relying on homolytic substitution at sulfur, phosphorus and selenium. Additionally free-radical functionalization of reactive functional groups including isonitriles, isothiocyanates and related unsaturated systems which offer a straightforward route towards useful aromatic and non-aromatic heterocycles are discussed. Finally, as metals are able to trigger single electron transfer both in reductive and oxidative modes this provides another possibility for the synthesis of heterocycles. Significant research efforts have focussed on the use of samarium, copper and other metals to access a broad variety of heterocycles in a single pot process, starting from readily available raw material. Examples and mechanistic insights are discussed by experts in this area.

Yannick Landais was born in Angers (France) in 1962. He received his PhD in chemistry from the University of Orsay (Paris XI) under the supervision of Dr. Jean-Pierre Robin. After carrying out post-doctoral studies with Prof. Ian Fleming at Cambridge University (1988-1990), he took a position of Maitre-Assistant at the University of Lausanne (1990-1997). He was then appointed at the University Bordeaux-I where he is currently Professor of organic chemistry. His research interests are in synthetic organic chemistry, asymmetric synthesis, radical chemistry, with a special emphasis on organosilicon chemistry and its applications in total synthesis of natural products. In 1997, he was awarded the Werner prize by the New Swiss Chemical Society. Between 2000 and 2005, he was a member of the Institut Universitaire de France. In 2014, he was elected as a senior Distinguished Member of the Société Chimique de France (SCF) and was awarded the SCF's Organic Chemistry Division prize the same year. He is currently President of the French-Japanese Chemical Society and is a member of the International Advisory Board of the European Journal of Organic Chemistry.