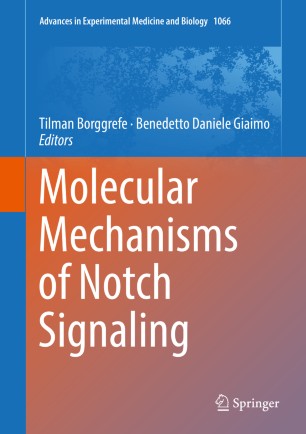 Part of the Advances in Experimental Medicine and Biology book series (AEMB, volume 1066)

This book describes the Notch signaling pathway with a focus on molecular mechanisms. The Notch signaling pathway is a seemingly simple pathway that does not involve any second messenger. Upon ligand binding two consecutive proteolytic cleavages of the NOTCH receptor release the Notch intracellular domain from the membrane. The Notch intracellular domain migrates into the nucleus and activates gene expression.

Recently, new technologies allowed us to better understand this pivotal signaling cascade and revealed new regulatory mechanisms. The different chapters cover many aspects of the Notch signaling focusing on the mechanisms governing the receptor/ligand interaction as well as on the downstream intracellular signaling events. Aspects of both canonical and non-canonical signaling are discussed and the function of Notch signaling in physiological and pathological contexts are elucidated.

This book is not only intended for experts but it should also be a useful resource for young, sprouting scientists or interested scientists from other research areas, who may use this book as a stimulating starting point for further discoveries and developments.