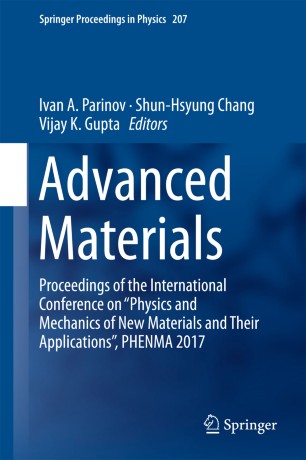 PHENMA: International Conference on Physics and Mechanics of New Materials and Their Applications

Proceedings of the International Conference on “Physics and Mechanics of New Materials and Their Applications”, PHENMA 2017

This book presents selected peer-reviewed contributions from the 2017 International Conference on “Physics and Mechanics of New Materials and Their Applications”, PHENMA 2017 (Jabalpur, India, 14–16 October, 2017), which is devoted to processing techniques, physics, mechanics, and applications of advanced materials. The book focuses on a wide spectrum of nanostructures, ferroelectric crystals, materials and composites as well as promising materials with special properties. It presents nanotechnology approaches, modern environmentally friendly piezoelectric and ferromagnetic techniques and physical and mechanical studies of the structural and physical–mechanical properties of materials. Various original mathematical and numerical methods are applied to the solution of different technological, mechanical and physical problems that are interesting from theoretical, modeling and experimental points of view. Further, the book highlights novel devices with high accuracy, longevity and extended capabilities to operate under wide temperature and pressure ranges and aggressive media, which show improved characteristics, thanks to the developed materials and composites, opening new possibilities for different physico-mechanical processes and phenomena.

DrSc Ivan A. Parinov received the MSc in Mechanics from the Rostov State University, Mechanics and Mathematics Department in 1978 (Rostov-on-Don, Russia), the PhD in Physics and Mathematics from the Rostov State University in 1990 and the DrSc in Techniques from the South-Russian State Technical University in 2008. He is Corresponding Member of Russian Engineering Academy (2014) He is working in the I. I. Vorovich Mathematics, Mechanics and Computer Sciences Institute of the Southern Federal University (former Rostov State University) from 1978. Today, he is Chief Research Fellow. He has head in 1993-2017 the Research Grants and Programs from Soros Foundation, Collaboration for Basic Science and Education (COBASE, USA), Russian Foundation for Basic Research (13 grants), Russian Ministry for Science and Education (8 grants and scientific proposals). He has published about 300 scientifictechnical publications among them 22 monographs (in particular, 4 books published with Sprin

ger and 12 books with Nova Science Publishers), additionally 3 books are in press. He has 12 Russian and Soviet patents and 3 certificates on Russian state registration of programs for computer. His developments were awarded 26 gold medals and special awards of European exhibitions. DrSc Ivan A. Parinov is reviewer of Zentralblatt fur Mathematik (Germany) and Mathematical Reviews (USA) from 1994 (above 450 reviews), review papers of journal SOP Transactions on Theoretical Physics (Scientific Online Publishing) from 2013. He was INTAS expert (2004), FP-7 expert (2010), ERA.NET RUS expert (2011, 2015, 2017) and he is the Russian Academy of Science expert (from 2016), the Russian Foundation for Basic Research expert (from 2017), the Russian Science Foundation (from 2017) and Russian Federal expert of scientific-technical area (2012-2018). He is winner of competition of the Russian Department of Education and Science (2014-2016 and 2017-2019) on direction “Organization of Fulfillment of the Scientific Researches”. DrSc Ivan A. Parinov is Active Member of the New York Academy of Sciences (1994), member of the American Mathematical Society (from 1996), the European Mathematical Society (from 1998) and The Indian Structural Integrity Society (from 2016). He has honorary title "Honorary Member of All-Russian Society of Inventors and Rationalizers" (2008). His research interests include R&D of novel materials and composites (in particular, high-temperature superconductors and ferropiezoelectrics), fracture mechanics and strength physics, acoustic emission, optics, mathematical modeling, different applications of advanced materials and composites.Dr. Shun-Hsyung Chang received the Ph.D. degree in electrical engineering from National Sun-Yat Sen University, Taiwan, in 1990. Afterwards, he served as an associate professor and has been a professor since 1997 in the Department of Electrical Engineering at National Taiwan Ocean University, Keelung, Taiwan, where he was the chairman 1998~2003. He also had served as the Vice President of National Kaohsiung Marine University, Kaohsiung, Taiwan, during 2003~2006. He is a professor in the Department of Microelectronic Engineering at this university presently. He has published over 250 technical papers. His research interests include underwater signal processing, electrical engineering, and communication engineering. His outstanding performance in research brought him great honor. In 1984, he was granted The Creative Youth prize by the Ministry of Education. He received the Long-Term Paper Award, organized by Acer Incorporated, in 1994, 1996 and 1998. He and his graduate students won the Third Prize of Graduate Team in TI-Taiwan 1994 DSP Design Championship. He also obtained the Distinguished Award in the contest of Special Topic of Communication System in graduate division held by the Ministry of Education in 2000. He contributes greatly in editorship. He was the editor-in-chief of the Journal of Marine Science and Technology 1998~2001, of which he is an editor at present. He is currently the editor-in-chief of the Journal of Ocean and Underwater Technology 2008-2011.
Dr. Vijay Kumar Gupta received Master’s and PhD Degree from Indian Institute of Technology Bombay in 1994 and 2003, respectively. He is working at Professor at PDPM Indian Institute of Information Technology, Design and Manufacturing Jabalpur. He is currently Head of the Mechanical Discipline. He has received various grants from different government agencies such as Department of Science and Technology. He was awarded “ISAMPE K. Suryanarayan Rao Memorial Senior student award for R&D in smart technology for Year 2003”. He was a JSPS Short term invitation fellow during December 07, 2015 to February 04, 2016. He has published 18 journal papers and more than 20 conference papers. He is reviewer of Journal of Smart Materials and Structures, Journal of Sound and Vibration and other journals. He is senior member of IEEE, member of SPIE and ASME. His research interest includes Smart Structures, Mechanical Vibrations and Condition Monitoring, Finite Element Analysis, Mechatronics and Robotics.

“The book will be very useful for students, graduate students, scientists and engineers who research and develop nanomaterials and structures, ferro-piezoelectrics, pyroelectrics, magnetic and environmentally friendly materials and composites. The book also discusses theoretical and experimental problems, related to research and mathematical modeling of modern devices using new promising materials that are suitable for wide applications in various scientific, technological and technical fields.” (Ivan A. Parinov, zbMATH 1397.82003, 2018)
Buy options