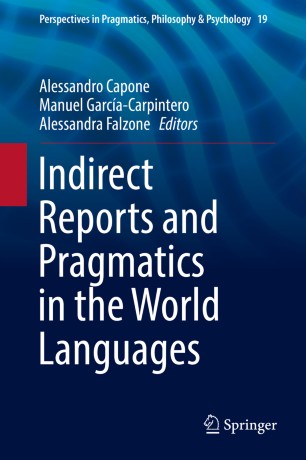 Indirect Reports and Pragmatics in the World Languages

This volume addresses the intriguing issue of indirect reports from an interdisciplinary perspective. The contributors include philosophers, theoretical linguists, socio-pragmaticians, and cognitive scientists. The book is divided into four sections following the provenance of the authors. Combining the voices from leading and emerging authors in the field, it offers a detailed picture of indirect reports in the world’s languages and their significance for theoretical linguistics. Building on the previous book on Indirect reports in this series, this volume adds an empirical and cross-linguistic approach that covers an impressive range of languages, such as Cantonese, Japanese, Hebrew, Persian, Dutch, Spanish, Catalan, Armenian, Italian, English, Hungarian, German, Rumanian, and Basque.