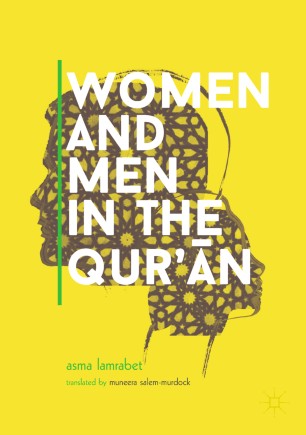 Women and Men in the Qur’ān

This book distinguishes Islam as a spiritual message from the sociopolitical context of its revelation.  While the sacred text of the Quran reveals a clear empowerment of women and equality of believers, such spirit is barely reflected in the interpretations.  Trapped between Western rhetoric that portrays them as submissive figures in desperate need of liberation, and centuries-old, parochial interpretations that have almost become part of the “sacred,” Muslim women are pressured and profoundly misunderstood. Asma Lamrabet laments this state of affairs and the inclination of both Muslims and non-Muslims to readily embrace flawed human interpretations that devalue women rather than remaining faithful to the meaning of the Sacred Text. Full of insight, this study carefully reads the Qur’an to arrive at its deeper spiritual teachings.

Asma Lamrabet is the author of several books on the position of women in Islam, and has lectured widely on the topic. Her writings include Women in the Qur’an: An Emancipatory Reading (2016), and she received the Social Sciences Award in 2013 by the Arab Woman Organization.  Dr. Lamrabet was the Director of Studies at the Research Center on Women’s Issues in Islam (centre d'études féminines en Islam/ Rabita al muhammadia des Oulémas du Maroc) for ten years. She lives and works in Rabat, Morocco, her birthplace.
Muneera Salem-Murdock was the Millennium Challenge Corporation’s Resident Country Director in Morocco for 7 years and has served as Senior Development Policy Advisor to the U.S. Executive Director at the World Bank and Senior Policy Analyst at USAID. She has worked extensively in Africa and the Middle East and has lectured widely on a variety of topics. She is the author of Arabs and Nubians in New Halfa: A Study of Settlement and Irrigation (University of Utah Press, 1989), co-author of Les Barrages de la Controverse: le cas de la Vallée du Fleuve Sénégal (1994), editor of Anthropology and Development in North Africa and the Middle East (1990), and contributor to several volumes including Anthropological Approaches to Resettlement: Policy, Practice, and Theory (1993), and Lands at Risk in the Third World (1987).