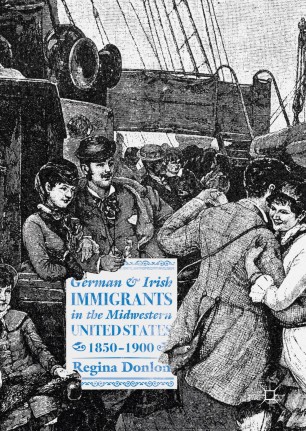 German and Irish Immigrants in the Midwestern United States, 1850–1900

In the second half of the nineteenth century, hundreds of thousands of German and Irish immigrants left Europe for the United States. Many settled in the Northeast, but some boarded trains and made their way west. Focusing on the cities of Fort Wayne, Indiana and St Louis, Missouri, Regina Donlon employs comparative and transnational methodologies in order to trace their journeys from arrival through their emergence as cultural, social and political forces in their communities. Drawing comparisons between large, industrial St Louis and small, established Fort Wayne and between the different communities which took root there, Donlon offers new insights into the factors which shaped their experiences—including the impact of city size on the preservation of ethnic identity, the contrasting concerns of the German and Irish Catholic churches and the roles of women as social innovators. This unique multi-ethnic approach illuminates overlooked dimensions of the immigrant experience in the American Midwest.

Regina Donlon works in the Department of History at Maynooth University, Ireland.