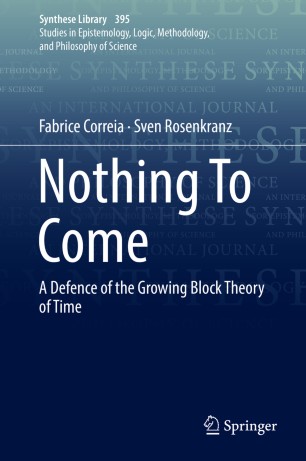 A Defence of the Growing Block Theory of Time

This monograph is a detailed study, and systematic defence, of the Growing Block Theory of time (GBT), first conceived by C.D. Broad. The book offers a coherent, logically perspicuous and ideologically lean formulation of GBT, defends it against the most notorious objections to be found in the extant philosophical literature, and shows how it can be derived from a more general theory, consistent with relativistic spacetime, on the pre-relativistic assumption of an absolute and total temporal order.

The authors devise axiomatizations of GBT and its competitors which, against the backdrop of a shared quantified tense logic, significantly improves the prospects of their comparative assessment. Importantly, neither of these axiomatizations involves commitment to properties of presentness, pastness or futurity. The authors proceed to address, and defuse, a number of objections that have been marshaled against GBT, including the so-called epistemic objection according to which the theory invites skepticism about our temporal location. The challenge posed by relativistic physics is met head-on, by replacing claims about temporal variation by claims about variation across spacetime.

The book aims to achieve the greatest possible rigor. The background logic is set out in detail, as are the principles governing the notions of precedence and temporal location. The authors likewise devise a novel spacetime logic suited for the articulation, and comparative assessment, of relativistic theories of time. The book comes with three technical appendices which include soundness and completeness proofs for the systems corresponding to GBT and its competitors, in both their pre-relativistic and relativistic forms.

The book is primarily directed at researchers and graduate students working on the philosophy of time or temporal logic, but is of interest to metaphysicians and philosophical logicians more generally.

Rosenkranz is ICREA Research Professor at the University of Barcelona. After award of his PhD from the University of St Andrews in 1999, he spent one year as postdoctoral research fellow at the Instituto de Investigaciones Filosóficas, UNAM, before taking up his post as Assistant Professor at FU Berlin in 2000. He completed his habilitation (senior doctorate) in 2005, and from 2005 until 2008, he was Heisenberg Fellow of the Deutsche Forschungsgemeinschaft. He joined ICREA and the University of Barcelona in December 2008. From 2010 until 2013 Rosenkranz coordinated the FP7 Marie Curie ITN on Perspectival Thoughts and Facts, the first of its kind exclusively in analytic philosophy. From 2014 until 2017, he was PI of the research project on Fallibility, Rational Belief and Knowledge, financed by the Spanish Ministry of Economy. He is currently coordinator of the Consolidated Research Group LOGOS at the University of Barcelona, and of the Horizon 2020 European Training Network Diaphora that focuses on the hardness of philosophical problems and the nature and extent of peer disagreement about their solutions. Rosenkranz specialises in metaphysics (realism, philosophy of time) and epistemology (agnosticism, fallibility, justification) and has written various articles and book chapters on issues in these areas, published with internationally renowned scientific journals and publishing houses.