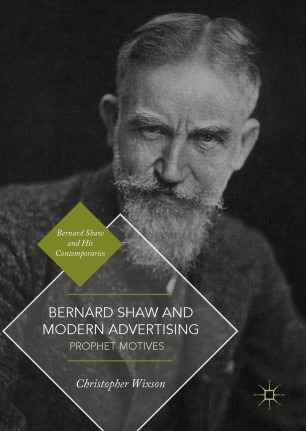 This book charts how promotional campaigns in which Bernard Shaw participated were key crucibles within which agency and personality could re-negotiate their relationship to one another and to the consuming public. Concurrent with the rise of modern advertising, the creation of Shaw’s 'G.B.S.' public persona was achieved through masterful imitation of patent medicine marketing strategies and a shrewd understanding of the relationship between product and spokesman. Helping to enhance the visibility of his literary writing and dovetailing with his Fabian political activities, 'G.B.S.' also became a key figure in the evolution of testimonial endorsement and the professionalizing of modern advertising. The study analyzes multiple ad series in which Shaw was prominently featured that were occasions for self-promotion for both Shaw and the agencies, and presage the iconoclastic style of contemporary 'public personality' and techniques of celebrity marketing.

Christopher Wixson is Professor of English and Theatre Arts at Eastern Illinois University, USA. He teaches advanced courses in early modern drama and modernism, script analysis and dramaturgy, and general education courses in writing and literature. He has published widely on twentieth-century British and American drama and is General Editor of SHAW: The Journal of Bernard Shaw Studies.

“In today’s culture so awash in celebrity endorsements, this clearly written study is illuminating, informative, and timely. It should prove most useful to scholars and students not only of Shaw, but also of media studies and cultural studies. It is a worthy addition to the very fine Bernard Shaw and His Contemporaries series.” (Sally Peters, author of the Choice award-winning biography Bernard Shaw: The Ascent of the Superman)
Buy options