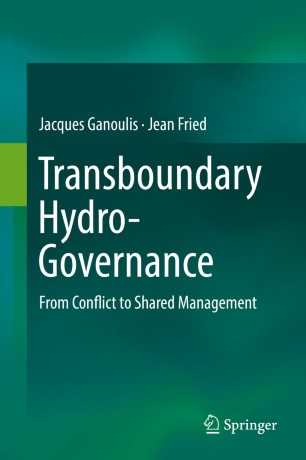 From Conflict to Shared Management

Attending water security is an important challenge and a major systemic risk humanity faces in the years to come. This is due to population increase, over-consumption of water, especially in agriculture, climate change and various forms of water pollution. The issue becomes more complicated in transboundary water catchments that cover almost half of the world’s land surface, with about 60% of global river flow and 40% of the world’s population. Also, in many parts of the planet, like Saharan Africa, population depends on groundwater resources located in transboundary aquifer systems. These facts illustrate the importance of the book's subject, which is the governance of transboundary waters, both surface and groundwater.

The book is written by two distinguished scientists, who, having worked in various international institutions, like UNESCO, GEF, UNEP and at the European Commission, have both an extended expertise on how to bridge the gap between science and political decision-making, which is the main factor for an effective governance of water resources. What is new in the book is the integrated analysis of transboundary governance of both surface water and groundwater, as it occurs in reality. In current literature, groundwater is still often missing for the benefit of surface water or, on the contrary, it is treated separately from surface water.

The most important feature of the book is to distinguish between the real and a "good" or an effective transboundary water governance and to provide practical tools, methodologies and examples for its implementation in the field. Published timely during 2018, the book will contribute to address successfully practical problems of governance of transboundary waters that represent a very important part of our precious fresh water resources.

Jacques Ganoulis is Emeritus Professor of Civil Engineering at the Aristotle University of Thessaloniki (Greece), Ph.D. (Doctorat d’Etat) in Natural Sciences from the University of Toulouse (France) and visiting scholar at the Universities of Erlangen (Germany), McGill (Canada), Melbourne (Australia) and Paris VI (France). He has more than 35 years’ experience in IWRM (Integrated Water Resources Management), risk analysis, climate change and transboundary water management, including transboundary aquifer resources and conflict resolution. He is currently the State Secretary for Water at the Ministry of Environment and Energy in Athens, Greece, the Director of the UNESCO Chair/International Network of Water-Environment Centres for the Balkans (INWEB), UNESCO's Senior Consultant and Greece representative in UNESCO’s International Hydrological Programme (IHP), Paris. He has published more than 200 papers in International Journals and Conferences and he is the co-editor/author of 10 books including “Transboundary Water Resources Management: a Multidisciplinary Approach” (WILEY, 2011), “Risk Analysis of Water Pollution” (WILEY, 2009; 2nd edition; translated into Chinese) and “Transboundary Groundwater Resources: Sustainable Management and Conflict Resolution” (Lambert Academic Publishing, 2016).

As Professor of Fluid Mechanics at the University Louis Pasteur of Strasbourg, France, Expert-Consultant at the European Commission in Brussels and President of the European Institute for Water, J. Fried developed an expert competence in directing multidisciplinary and multicultural professional groups of scientists, policy-makers and planners, administrators and their technical staff, to prepare the scientific background of water legislation in the European Union (EU), and draft the corresponding water directives (laws). He also directed water governance capacity-building programs of the EU in various countries and regions, such as, among others, the Middle East, South America, the European Union and most of its member states, the Maghreb countries, Uzbekistan, South Africa, with an emphasis on water, groundwater and sustainable development. He has been a visiting professor and a guest lecturer in many universities world wide in the US, Australia, Canada, Russia and Siberia, among others. J. Fried has published more than 150 articles in international journals and conferences and is the author/co-author/co-editor of several books and chapters in books or conference proceedings, including Transboundary Water Resources Management: a Multidisciplinary Approach (Wiley, 2011) and Proceedings of the 3rd International Symposium on Transboundary Waters Management (Universidad de Castilla-La Mancha, Spain, 2006). He has directed the UNESCO Pilot Courses on Transboundary Groundwater Sustainable Management of Thessaloniki, Greece (2008) and Paris, France (2010).