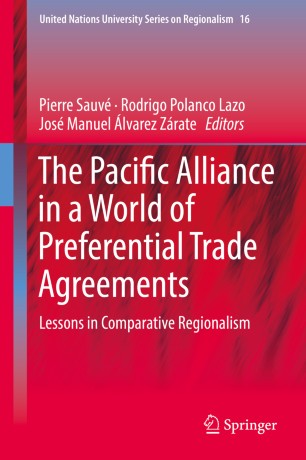 The Pacific Alliance in a World of Preferential Trade Agreements

This volume focuses on one of the most innovative deep integration constructs, The Pacific Alliance, which aims at expanding the frontiers of trade and investment governance in Latin America. It draws on a conference held at Externado University in Bogota, Colombia, in November 2015, bringing together leading scholars, practitioners and officers of public, regional and international organisations interested in a critical analysis of the Alliance, its distinctiveness and likely future directions. The volume features contributions from the multi-disciplinary lens of law, political science and economics.

The Pacific Alliance, comprising Chile, Colombia, Mexico and Peru, aims through a participatory and consensual manner to promote the free circulation of goods, services, capital and persons among its members, and to secure deep economic integration through collaboration across a broader set of policy areas than typically obtains in more traditional preferential trade agreements. This volume is of interest to policy makers and staff of international organizations involved in trade and investment negotiations, international economic governance in general as well as faculty, researchers and graduate students of these topics and of international political economy and comparative regionalism.

Pierre Sauvé serves as a Senior Trade Specialist in the Geneva office of the World Bank Group. Previously, he served as Director of External Programs and Academic Partnerships at the University of Bern's World Trade Institute (WTI), in Switzerland. He holds visiting professor appointments at the WTI and at the University of Barcelona. He taught at the Institut d’Etudes Politiques in Paris and at the London School of Economics and Political Science in 2003-05. He served as a senior economist in the OECD Trade Directorate from 1993-2002, a period during which he also taught at the John F. Kennedy School of Government at Harvard University and was appointed Non-resident Senior Fellow at the Brookings Institution in Washington, D.C. (1998-2000). He served as services negotiator within the Canadian Department of Foreign Affairs and International Trade's Office of North American Free Trade Negotiations (1991-93). He was previously a staff member of the General Agreement on Tariffs and Trade in Geneva, Switzerland (1988-91) and of the Bank for International Settlements, in Basel, Switzerland (1987-88). Mr. Sauvé was educated in economics and international relations at the Université du Québec à Montreal and Carleton University in Canada and at Cambridge and Oxford universities in the United Kingdom. His research interests lie in the areas of services trade, the regulation of foreign direct investment and comparative regional integration, issues on which he has published extensively. His latest book, co-edited with Martin Roy and entitled “Research Handbook on Trade in Services”, was published by Edgar Elgar 2016.

Jose Manuel Alvarez-Zárate is a professor at Externado University of Colombia in the Law and Economics Department where he runs the International Economic Law (IEL)  program. He holds a degree in Administrative Law and a Ph. D. He has been visiting scholar at American University Washington College of Law, Fundación Getulio Vargas, Río de Janeiro, Brazil, and Visiting Research Fellow, British Institute of International and Comparative Law, London. He has been teaching and practicing in the fields of trade, investment, administrative regulatory law and dispute settlement for more than thirty years and has been widely published. His legal experience includes consultancy for private and public entities in trade negotiations and international business, as well as acting as counsel before administrative courts, local and international arbitration panels and the Andean Tribunal.