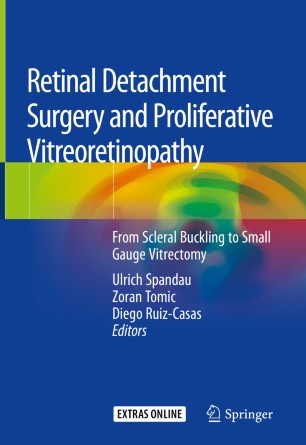 This clinically oriented book provides a complete  overview of Proliferative vitreoretinopathy (PVR) Retinal  Detachment, a difficult surgical challenge faced by  ophthalmologists. Small gauge vitrectomy offers new  possibilities to tackle  this  difficult pathology however this surgical approach  may  differ from one  retinal surgeon to the next. To reflect the various approaches to treating PVR, the book  is divided up in  three parts. In the first part the authors describe the complete variety  of surgical  techniques applied to PVR detachment. In the second section, well-known international  surgeons from  Europe to Asia describe  their personal surgical approach  for PVR detachment  and  demonstrate their surgery in videos. In the third part, a  large  variety of retinal surgeons show case reports of PVR  retinal detachment to give a complete overview of dealing  with this complex retinal disorder.

Ulrich Spandau, MD, PhD studied medicine at the University of Würzburg in Germany before completing residencies in the Departments of Ophthalmology at the University of Heidelberg and the University of Mannheim-Heidelberg. He undertook further surgical training at the Eye Clinic, Koblenz and became an accredited specialist in ophthalmology in 2003. In 2004 Dr. Spandau was appointed Oberarzt (consultant) in the Department of Ophthalmology, University of Mannheim-Heidelberg, and he subsequently became Vice Director of the department. He completed his PhD and received his venia legendi in 2005. In 2008 Dr. Spandau became Consultant and Head of Surgery at the Department of Ophthalmology, University Hospital of Uppsala, Sweden. He has been an associate professor since 2013. He has published 52 in indexed, peer-reviewed journals and is co-editor of several previous Springer books, including Practical Handbook for Small-Gauge Vitrectomy.

Diego Ruiz-Casas, MD, PhD completed his undergraduate studies at University of Zaragoza. He received his PhD in Medicine and Surgery with honors at University of Alcalá de Henares. After his residency at Ramón y Cajal university Hospital, he underwent further training in vitreoretinal surgery at several international eye clinics.

“The book is written for practicing vitreoretinal surgeons, addressing the need for a well‐written practical manual for PVR detachment surgery approaches and current consensus. … This book in the era of small vitrectomy is a valuable addition …” (Diana V Do, Doody's Book Reviews, August 23, 2019)
Buy options