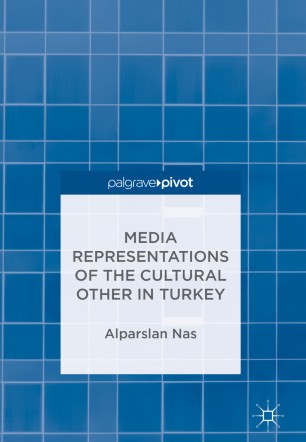 Media Representations of the Cultural Other in Turkey

“A fresh study that confirms the existence of multiple peripheries (and its others) in Turkish society and how dominant centrist media represented these differences in film and television discourse. The use of Mardin’s center-periphery concept for the analyses of films, ads and cartoons is brilliant. This is a timely project as scholarly interest in Turkey has increased exponentially since 2013. This project is key to understanding the roots of a media politics in contemporary Turkey.”

“Alparslan Nas' seminal work disrupts the notion of Turkish identities as fixed and stable. He challenges the center (secular, modern, Western)/ peripheral (conservative, religious) binary by critically examining how a cultural “other” is constructed and performed through the media in Turkey. Nas’ analysis offers a (much needed) new lens and approach to understanding Turkey’s complex social and political landscape.”

This book is an important contribution to the scholarship on Turkey’s cultural and political dynamics, facilitating a discussion on the recent depictions of the cultural other in the media. Turkey’s modern history has been characterized by a particular tension between the social classes occupying the “center” of society: while the bureaucratic elite are represented as modern, secular and westernized, the “peripheral” communities are portrayed as conservative, religious or non-Turkish. This book facilitates a timely intervention to problematize this possible perception and to point at the complex dynamics of center-periphery relations through the representation of the cultural other in film, television, advertisements and cartoons, which have all been produced by different social classes. Ultimately, Media Representations of the Cultural Other in Turkey argues that the notions of the center and periphery do not signify stable positions; rather, each social agent imagines themselves at the center, the cultural other at their periphery providing a crucial tool for the realization of their own identity.

“Media Representations of the Cultural Other in Turkey offers up-to-date analysis of recent media content (advertisements, cartoons, films and TV shows) with the aim to answer whether a center-periphery binary is exploited in contemporary production.” (Zerina Ćatović, KULT_online - Review Journal for the Study of Culture, Issue 57, 2019)