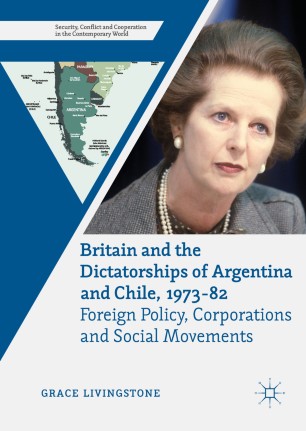 This book explores the links between the British government and the dictatorships of Argentina and Chile, 1973-82, using newly-opened British archives. It gives the most complete picture to date of British arms sales, military visits and diplomatic links with the Argentine and Chilean military regimes before the Falklands war. It also provides new evidence that Britain had strategic and economic interests in the Falkland Islands and was keen to exploit the oil around the Islands. It looks at the impact of private corporations and social movements, such as the Chile Solidarity Campaign and human rights groups, on foreign policy. By analyzing the social background of British diplomats and tracing the informal social networks between government officials and the private sector, it considers the pro-business biases of state officials. It describes how the Foreign Office tried to dissuade the Labour governments of 1974-79 from imposing sanctions on the Pinochet regime in Chile and discusses whether un-elected officials place constraints on politicians aiming to pursue an ‘ethical’ foreign policy.

“Grace Livingstone's book should be read by everyone who takes an interest in foreign policy and international affairs. It is a gem which demonstrates not only the need for changes in the way that foreign policy is formulated but also for a more open and democratic system of recruiting Foreign Office and diplomatic personnel ...” (Stan Newens, Spokesman, Issue 141, 2019)

“The work is, I believe, unique in undertaking an in-depth examination of the role of the state during this important period for international relations, because no-one to date has undertaken such a holistic and intelligently perceptive approach to examining government policy, bringing in issues of class, economics, the role played by solidarity pressure groups and trade unions and structural factors. … There is so much of value in this book. … A vital contribution to our historical understanding of how the state works.” (Morning Star, morningstaronline.co.uk, October, 2018)