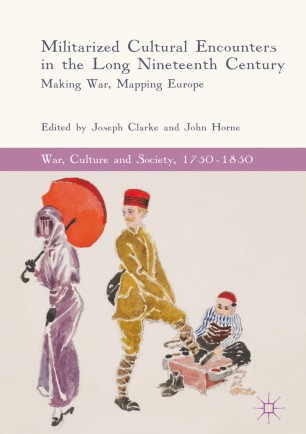 This book explores European soldiers’ encounters with their continent’s exotic frontiers from the French Revolution to the First World War.  In numerous military expeditions to Italy, Spain, Russia, Greece and the ‘Levant’ they found wild landscapes and strange societies inhabited by peoples who needed to be ‘civilized.’ Yet often they also discovered founding sites of Europe’s own ‘civilization’ (Rome, Jerusalem) or decaying reminders of ancient grandeur. The resulting encounters proved seminal in forging a military version of the ‘civilizing mission’ that shaped Europe’s image of itself as well as its relations with its own periphery during the long nineteenth century.

Joseph Clarke is Lecturer in European History at Trinity College Dublin, Ireland. His publications include Commemorating the Dead in Revolutionary France: Revolution and Remembrance, 1789-1799 (2007) and articles and essays on the Revolutionary and Napoleonic period.
John Horne is Emeritus Professor of Modern European History at Trinity College Dublin. He has published widely on the history of twentieth century France and the comparative and transnational history of the First World War.
y
tj
y
j
yj