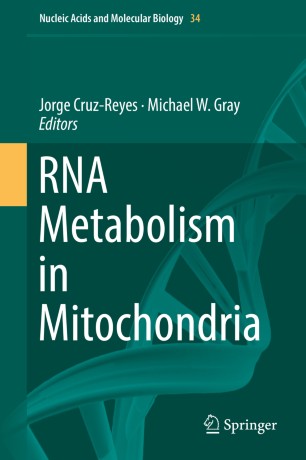 This volume focuses on mitochondrial RNA metabolism, emphasizing recent discoveries and technological advances in this fast moving area that increase our understanding of mitochondrial gene function. Topics addressed include the interplay of mitochondria with the nucleus and cytosol, structure-function connections, and relevance to human disease. Mitochondria are the powerhouses of the cell, and a great deal is known about mitochondrial energy metabolism. Less well known is the plethora of amazing mechanisms that have evolved to control expression of mitochondrial genomes. Several RNA processes and machineries in protozoa, plants, flies and humans are discussed, including: transcription and RNA polymerase mechanism; tRNA processing of 5′ and 3′ ends; mRNA maturation by nucleotide insertion/deletion editing and by RNA splicing; mRNA stability; and RNA import. Specialized factors and ribonucleoproteins (RNPs) examined include pentatricopeptide repeat (PPR) proteins, RNase P, polymerases, helicases, nucleases, editing and repair enzymes. Remarkable features of these processes and factors are either not found outside mitochondria, differ substantially among eukaryotic lineages, or are unique in biology.

Dr. Jorge Cruz-Reyes, Department of Biochem. & Biophysics, and Department of Genetics. Texas A&M University and Texas AgriLife Research (AgriLife), College Station, Texas, USA.
Email: cruzrey@tamu.edu
Jorge Cruz-Reyes is a Professor in the Department of Biochemistry & Biophysics, and Department of Genetics, Texas A&M University (TAMU).
Since he joined the faculty at TAMU in 2001 he has carried out studies of the RNA editing apparatus and mechanism in trypanosome mitochondria. More recently he began working on the development of lead compounds against in T. brucei and T. cruzi and molecular genetics of the potential targets. His multi-disciplinary research involves collaborations with several labs at TAMU and in other Universities in the USA and abroad.
He obtained a Master's degree in Biomedical Research from the Institute of Biotechnology in UNAM, Mexico. He received a Ph.D. in Molecular Parasitology from the London School of Hygiene and Tropical Medicine, University of London. His interest in RNA biology and a prestigious Pew Fellowship Award led him to The Johns Hopkins School of Medicine, where he joined the lab of Barbara Sollner-Webb to work on trypanosome RNA editing during his postdoctoral training. Currently, he teaches courses in Molecular Genetics and RNA Biology. He also regularly serves in scientific review groups at the NIH and the NSF.
Dr. Michael W. Gray, Dalhousie University Dept. Biochem. & Molecular Biol. and Centre for Comparative Genomics and Evolutionary Bioinformatics (CGEB), Halifax, Nova Scotia, Canada.  Email: m.w.gray@dal.ca
Michael W. Gray is Professor Emeritus in the Department of Biochemistry and Molecular Biology, Dalhousie University (Halifax, Nova Scotia, Canada), which he joined in 1970, serving as head from 2004 to 2007. Since 1970, he has carried out research on the structure, function, and evolution of organelles (particularly mitochondria) and of eukaryotic RNA processing pathways (particularly RNA modification and RNA editing). A focus on protists (eukaryotic microbes) and use of a comparative genomics approach has underpinned his research.
Gray obtained his BSc (1964) and PhD (1968) in biochemistry from the University of Alberta, Edmonton, subsequently moving to Stanford University for postdoctoral training (1968–70). During his tenure as a faculty member at Dalhousie University, he was a Fellow in the Program in Evolutionary Biology of the Canadian Institute for Advanced Research (1987–2007) and held a Tier I Canada Research Chair in Genomics and Genome Evolution (2001–08). He was elected to Fellowship in the Royal Society of Canada (1996) and the American Academy of Microbiology (2014). Currently, he serves as a member of the Steering Committee of the Centre for Comparative Genomics and Evolutionary Bioinformatics (CGEB) at Dalhousie University.