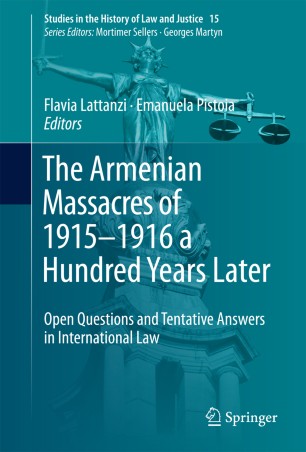 The Armenian Massacres of 1915–1916 a Hundred Years Later

Part of the Studies in the History of Law and Justice book series (SHLJ, volume 15)

This peer-reviewed book features essays on the Armenian massacres of 1915-1916. It aims to cast light upon the various questions of international law raised by the matter. The answers may help improve international relations in the region. In 1915-1916, roughly a million and a half Armenians were murdered in the territory of the Ottoman Empire, which had been home to them for centuries. Ever since, a dispute between Armenians and Turkey has been ongoing over the qualification of the massacres. The contributors to this volume examine the legal nature and consequences of this event. Their investigation strives to be completely neutral and technical. The essays also look at the broader issue of denial. For instance, in Turkey, public speech on the matter can still trigger criminal prosecution whereas in other European States denial of genocide, war crimes and crimes against humanity is criminalized. However, the European Court of Human Rights views criminal prosecution of denial of the Armenian massacres as unlawful. In addition, one essay considers a state’s obligation to remember by looking at lessons learnt from the Inter-American Court of Human Rights. Another contributor looks at a collective right to remember and some ideas to move forward towards a solution. Moreover, the book explores the way the Armenian massacres have affected the relationship between Turkey and the European Union.

Flavia Lattanzi is Full Professor of International Law and served as Ad Litem Judge at the International Criminal Tribunal for Rwanda (2003-2007) and at the International Criminal Tribunal for the Former Yugoslavia (2007-2016). She has been a member of the International Fact-Finding Commission created by Protocol I additional to the Geneva Conventions and Member and then President of the commission set up by the Italian Ministry of Justice on the implementation of international rules in the matter of criminal judiciary assistance.
Emanuela Pistoia is currently Associate Professor of European Union Law at Università di Teramo, Italy. Her main research topics are cooperation in criminal matters, differentiated integration, the EU security and defence policy, competition law, immigration policy, European citizenship.