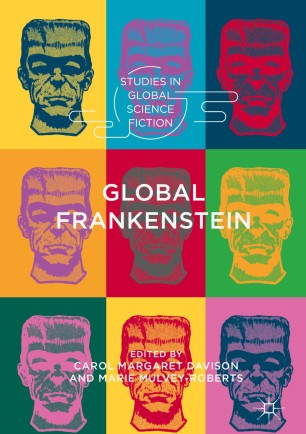 Consisting of sixteen original essays by experts in the field, including leading and lesser-known international scholars, Global Frankenstein considers the tremendous adaptability and rich afterlives of Mary Shelley’s iconic novel, Frankenstein, at its bicentenary, in such fields and disciplines as digital technology, film, theatre, dance, medicine, book illustration, science fiction, comic books, science, and performance art. This ground-breaking, celebratory volume, edited by two established Gothic Studies scholars, reassesses Frankenstein’s global impact for the twenty-first century across a myriad of cultures and nations, from Japan, Mexico, and Turkey, to Britain, Iraq, Europe, and North America. Offering compelling critical dissections of reincarnations of Frankenstein, a generically hybrid novel described by its early reviewers as a “bold,” “bizarre,” and “impious” production by a writer “with no common powers of mind”, this collection interrogates its sustained relevance over two centuries during which it has engaged with such issues as mortality, global capitalism, gender, race, embodiment, neoliberalism, disability, technology, and the role of science.

Carol Margaret Davison is Professor of English Literature at the University of Windsor, Canada and the author of History of the Gothic: Gothic Literature, 1764-1824 (2009) and Anti-Semitism and British Gothic Literature (Palgrave Macmillan, 2004). She recently edited The Gothic and Death (2017) and The Edinburgh Companion to the Scottish Gothic (2017) with Monica Germanà.

Marie Mulvey-Roberts is Professor of English Literature at the University of the West of England, Bristol, UK and author of Dangerous Bodies: Historicising the Gothic Corporeal (2016), winner of the Alan Lloyd Smith Memorial Prize.  She has authored, edited, and co-edited over 30 books. Recently she made a film on Frankenstein for a MOOC (Massive Open Online Course) on the literary South West.

“I must declare that the essays in this collection comprise a thorough, thought-provoking, and occasionally brilliant body of scholarship. … Global Frankenstein provides a varied and fascinating array of critical approaches to Frankenstein itself as well as a truly remarkable range of related works. … I recommend following Davison and Mulvey-Roberts’ excellent collection with further scholarship on the international reach of Shelley’s hideous progeny.” (Sarah Canfield, SFRA Review, Vol. 51 (1), 2021)