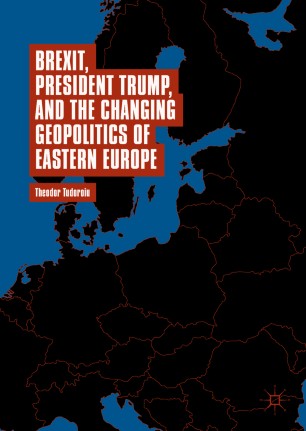 Brexit, President Trump, and the Changing Geopolitics of Eastern Europe

This book analyzes the combined consequences of Brexit and of the new US foreign policy under President Trump on the geopolitical situation of Eastern Europe. It perceives the evolution of the East European regional security complex as a struggle between the European Union's Kantian, win-win geopolitical vision and Russia's neoclassical geopolitics, also promoted by President Trump. In the most probable scenario, the latter approach will have the upper hand. The EU's post-Brexit control by the Franco-German axis will likely be followed by the geopolitical irrelevance of the EU due to the renationalization of member states' foreign policy, with Germany becoming the main West European actor. Consequently, Eastern Europe will be turned into the arena of a mainly three-cornered neoclassical geopolitics rivalry opposing Russia, the Franco-German axis and then Germany, and the US in alliance with the post-Brexit UK and certain East European states. The book will appeal to scholars across the fields of International Relations, Geopolitics, European Studies, and Area Studies.

Theodor Tudoroiu is Senior Lecturer at the Department of Political Science of the University of the West Indies at St. Augustine, Trinidad and Tobago. He works mainly on subjects related to post-communist and Middle Eastern regional politics and regime change.

“Tudoroiu has produced a thought-provoking analysis at a critical juncture of Europe’s development. He probes the linkages between a faltering EU that has been abandoned by Britain, a resurgent Russian regime, and President Trump’s focus on America’s exclusivity. In particular, he insightfully explores the impact these unprecedented developments are likely to have on the security of the Central-East Europe states.” (Janusz Bugajski, Center for European Policy Analysis, USA)

“Central Europe’s feeling of security is eroding under the double pressure of Russia’s increased military assertiveness and the growing tide of populism in parts of US and Western Europe. New fears permeate Central European views of geopolitics, and Tudoroiu unpacks and explains them in a theoretically rich, well-researched and thoughtful manner.” (Nicu Popescu, European Union Institute for Security Studies, France)