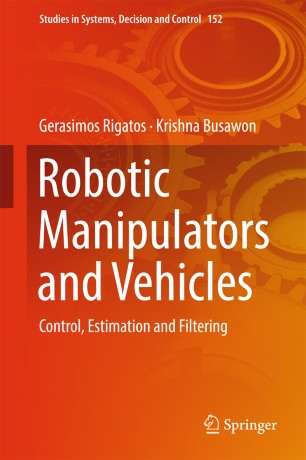 Part of the Studies in Systems, Decision and Control book series (SSDC, volume 152)

This monograph addresses problems of:
• nonlinear control, estimation and filtering for robotic manipulators (multi-degree-of freedom rigid-link robots, flexible-link robots, underactuated, redundant  and cooperating manipulators and closed-chain robotic mechanisms); and
• nonlinear control, estimation and filtering for autonomous robotic vehicles operating on the ground, in the air, and on and under water, independently and in cooperating groups.
The book is a thorough treatment of the entire range of applications of robotic manipulators and autonomous vehicles. The nonlinear control and estimation methods it develops can be used generically, being suitable for a wide range of robotic systems. Such methods can improve robustness, precision and fault-tolerance in robotic manipulators and vehicles at the same time as enabling the reliable functioning of these systems under variable conditions, model uncertainty and external perturbations.

Gerasimos Rigatos obtained a diploma (1995) and a Ph.D. (2000) both from the Department of Electrical and Computer Engineering, of the National Technical University of Athens (NTUA), Greece. Currently he holds an Research Director position (Grade A) at the Industrial Systems Institute (Greek Secretariat for Research and Technology), on the topic of “Modelling and Control of Industrial Systems”. In 2001 he was a post-doctoral researcher at the Institut de Recherche en Informatique et Systèmes Aléatoires IRISA, in Rennes France. In 2007 he was an invited professor (maître des conférences) at Université Paris XI (Institut d’ Electronique Fondamentale). In 2012 he held a Lecturer Position at the Department of Engineering, of Harper-Adams University College, in Shropshire, UK on the topic of “Mechatronics and Artificial Intelligence". He has also been an adjunct professor in Greek Universities where he has taught courses on systems and control theory. His research interests include the areas of control and robotics, optimization and fault diagnosis, adaptive systems and computational intelligence. He is a Senior Member of IEEE, a member and CEng of IET and a member of IMACS. He has also held a visiting Professor position at the University of Salerno, Italy. and a visiting Professor position at the University of Northumbria, UK

Krishna Busawon obtained his first degree in Mathematics and Fundamental Sciences from University of St-Etienne in 1989. He obtained a MSc (Electrical Engineering) from the University of Lyon in 1991 and then his MPhil and PhD in control systems engineering from the same institution in 1992 and 1996 respectively. Doctor Busawon was appointed as a research fellow at Simon Fraser University, Canada, in 1997 and then moved to the University of Nuevo León in Mexico where he worked as a lecturer in the Department of Mechanical and Electrical Engineering. In the year 2000, he joined Northumbria University where he was appointed as a senior lecturer in the School of Computing, Engineering and Sciences. In 2008 he became a reader in Control Systems Engineering and, since February 2013, a professor at the same university.  He is currently the coordinator of graduate and post-graduate studies  as the head of the Nonlinear Control Research Group. Doctor Busawon’s research interests lie mainly in the area of mathematical modelling, nonlinear control and observer design, fault detection and isolation with application to various engineering disciplines such as mechanical, power and biotechnological systems. Recent research interests are in compressive sensing, chaos communications and hybrid systems.