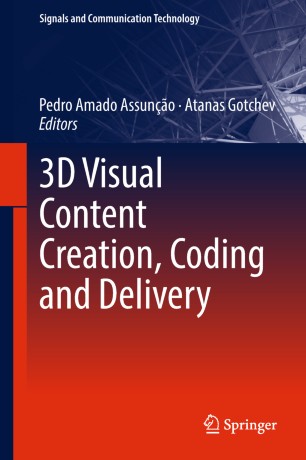 This book covers the different aspects of modern 3D multimedia technologies by addressing several elements of 3D visual communications systems, using diverse content formats, such as stereo video, video-plus-depth and multiview, and coding schemes for delivery over networks. It also presents the latest advances and research results in regards to objective and subjective quality evaluation of 3D visual content, extending the human factors affecting the perception of quality to emotional states.

The contributors describe technological developments in 3D visual communications, with particular emphasis on state-of-the-art advances in acquisition of 3D visual scenes and emerging 3D visual representation formats, such as:

Simulation tools, testbeds and datasets that are useful for advanced research and experimental studies in the field of 3D multimedia delivery services and applications are covered. The international group of contributors also explore the research problems and challenges in the field of immersive visual communications, in order to identify research directions with substantial economic and social impact.

3D Visual Content Creation, Coding and Delivery provides valuable information to engineers and computer scientists developing novel products and services with emerging 3D multimedia technologies, by discussing the advantages and current limitations that need to be addressed in order to develop their products further. It will also be of interest to students and researchers in the field of multimedia services and applications, who are particularly interested in advances bringing significant potential impact on future technological developments.

​Pedro A. Amado Assunção received the Licenciado and M.Sc. degrees in Electrical Engineering from the University of Coimbra, Portugal, in 1988 and 1993, respectively, and the Ph.D. in Electronic Systems Engineering from the University of Essex, UK, in 1998. He is currently Professor of Electrical and Computer Engineering, Electronics and Multimedia Communication Systems at the Polytechnic Institute of Leiria and senior researcher at Instituto de Telecomunicacoes, Portugal. He has been involved in several projects in the field of multimedia communications and he served as a reviewer and/or technical programme committee of many international conferences and journals. He is author/co-author of more than one hundred papers published in international scientific conferences and journals, one book, eight book chapters and four US patents. His current research interests include ultra-high definition 3D multiview and light-field video coding, communications and processing, video codec complexity control and networking adaptation of coded video streams, error concealment and quality assessment. He was the Chair of the EU COST Action IC1105, 3D Content Creation, Coding and Transmission over Future Media Networks (3D-ConTourNet) and General Chair of 3DTV-Con 2015. He is a Senior Member of the IEEE.
Atanas Gotchev received M.Sc. degrees in radio and television engineering (1990) and applied mathematics (1992) and Ph.D. degree in telecommunications (1996) from the Technical University of Sofia, and D.Sc. (Tech.) degree in information technologies from Tampere University of Technology (2003). He is Professor at Tampere University of Technology and Director of the Centre for Immersive Visual Technologies. He has published more than 30 articles in referred scientific journals, 4 book chapters and more than 145 papers in refereed scientific edited volumes and conference proceedings. He has actively contributed to the organization of the 3DTV se
ries of conferences (being twice General Chair and four times Technical Program Chair), and served as a committee member and reviewer in a number of conferences such as EUSIPCO, IEEE ICME, IEEE ICIP, etc. He was the Scientific Coordinator of the EU FP7 project Mobile3DTV and currently he is the Coordinator of the European Training Network of Full Parallax Imaging. His recent research concentrates on methods and algorithms for multi-sensor 3-D scene capture, transform-domain light-field reconstruction, and Fourier analysis of 3-D displays.