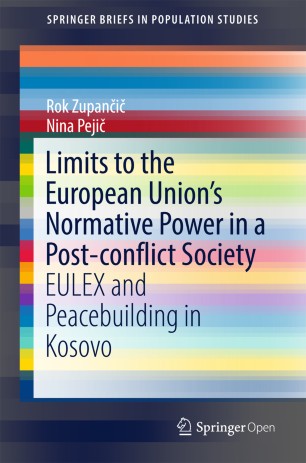 EULEX and Peacebuilding in Kosovo

By shedding light on EULEX - the EU mission to Kosovo – this open access book investigates the EU’s peacebuilding activities in that country, in the light of the normative power theory in the post-conflict setting and peacebuilding theory. Ten years after the massive engagement of the EU in the country torn by war, the authors critically assess the effects of the EU projecting its normative power – the enforcement of its standards, ‘good’ or ‘bad’ – through the EULEX mission, taking into consideration also the local aspects, so far neglected in this field of research. Inspecting thoroughly the EULEX activities in the police, customs and judiciary sector, the authors reveal that the mission can contribute to a positive change, but only in those cases which do not request a heavy political involvement and broad leverage by other international players (for example in improving standards of work in police and customs). When it comes to the most serious cases of organized crime, corruption and war crimes, EULEX, however, has not been able to address them effectively due to several internal mission’s deficiencies and external factors; the perceived ineffectiveness of EULEX among the local population led to the lowering of trust not only in this CSDP mission, but also in the EU in general.

This open access book offers a comprehensive assessment of the EULEX mission, based on two Horizon2020 research projects: IECEU - Improving the Effectiveness of Capabilities in EU Conflict Prevention, and KOSNORTH – The European Union and its Normative Power in a Post-conflict Society: A Case Study of Northern Kosovo (Marie Sklodowska-Curie Individual Fellowship). As such it is an invaluable resource for scholars, students and policymakers interested in security questions in South Eastern Europe and EU external action.

Rok Zupančič is a Marie Curie Fellow at the Centre of Southeast Europe, University of Graz, and Assistant Professor at the University of Ljubljana, Faculty of Social Sciences. His research interests focus on regional security in Southeast Europe, conflict prevention, post-conflict stabilization, reconciliation and the role of the EU and other international organizations in these processes. Rok led the research team of the University of Ljubljana in a H2020 project IECEU – Improving the Effectiveness of Capabilities in EU conflict prevention, focusing on CSDP missions and operations in the Balkans. Currently he is working on a Marie S. Curie Individual Project “KOSNORTH” which analyses the intra-ethnic conflict in North of Kosovo.

Nina Pejič is a PhD candidate and a Young Researcher at the Centre of International Relations, University of Ljubljana. Previously  held a position of a Research Fellow on a Horizon2020 project IECEU (Improving the Effectiveness of Capabilities in EU Conflict Prevention) at the Centre for Defence Studies, University of Ljubljana. She gained her M.A. degree in International Relations in 2017 on the topic of conflict prevention and reconciliation. Her research interests lie in regional conflict prevention and policies for upkeeping international peace and security, focusing both on European and Asian region.