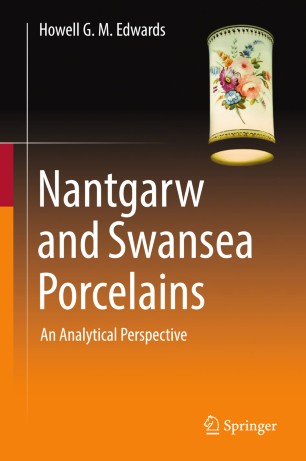 This book gives a detailed account of the holistic research carried out on the analytical data obtained historically on the products of the Nantgarw and Swansea porcelain manufactories which existed for a few years only during the second decade of the 19th Century. A background to the establishment of the two factories, which are linked through the persons of the enigmatic William Billingsley and his kiln manager, Samuel Walker, involves the sourcing of their raw materials and problems associated with the manufacture and distribution of the finished products. A description of the minerals and additives used in porcelain production is recounted to set the scene for the critical evaluation of the comprehensive analytical data which have been published on Nantgarw and Swansea porcelains. For the first time, the author has adopted a nondestructive technique, Raman spectroscopy, to interrogate perfect samples of Nantgarw and Swansea porcelain, as well as a selection of shards from an archaeological excavation carried out at a waste dump at the Nantgarw China Works site. Following these experiments, several questions relating to the porcelain bodies of Swansea and Nantgarw china can be answered and a protocol established for the preliminary evaluation of items of suspect attribution to confirm or not the correctness of their assignment to these Welsh porcelain factories.

Howell Edwards, M.A., B.Sc., D.Phil., C.Chem., FRSC, is Emeritus Professor of Molecular Spectroscopy at the University of Bradford. He studied Chemistry at Jesus College, Oxford, and completed his doctorate there followed by a Research Fellowship at Jesus College, Cambridge. He then joined the University of Bradford as Lecturer in Structural and Inorganic Chemistry. In 2003, he received the Sir Harold Thompson Award from Elsevier Science for his international contributions to vibrational spectroscopy. He is the recipient of the Emanuel Boricky Medal for 2008/2009 from Charles University, Prague, for distinguished international contributions to analytical geochemistry and mineralogical analysis. He was awarded the Charles Mann Award from the US Federation of Analytical Chemical Spectroscopic Societies in 2011 for distinguished international work on the analytical applications of Raman spectroscopy. In his research career he has published over 1260 papers on Raman spectroscopy and its applications and is the co-editor of six books on Raman spectroscopy and its applications to archaeology, art and forensic analysis. He has had a lifelong interest in the works of William Billingsley, especially porcelains from the Derby, Swansea and Nantgarw factories, and has published a book in sole authorship with Springer Publishing, Dordrecht, the Netherlands, on “Swansea and Nantgarw Porcelains: A Scientific Reappraisal” which appeared in 2017. In addition, he has published four monographs on William Billingsley and his porcelains, entitled: William Billingsley: The Enigmatic Porcelain Artist, Decorator and Manufacturer; Nantgarw Porcelain: The Pursuit of Perfection; Swansea Porcelain: The Translucent Vision of Lewis Dillwyn: and Derby Porcelain: The Golden Years, 1780-1830.  He is Honorary Scientific Adviser to the de Brecy Trust for the scientific evaluation of artworks and paintings.