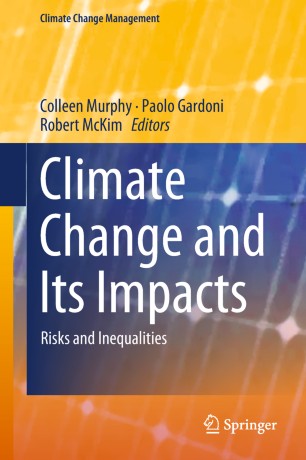 Climate Change and Its Impacts

Responding to a need for a deeper and more nuanced understanding of the consequences of climate change, this book brings experts in climate science, engineering, urban planning, and conservation biology into conversation with scholars in law, geography, anthropology and ethics. It provides insights into how climate change is conceptualized in different fields. The book also aims to contribute to developing successful and multifaceted strategies that promote global, intergenerational and environmental justice. Among the topics addressed are the effects of climate change on the likelihood and magnitude of natural hazards, an assessment of civil infrastructure vulnerabilities, resilience assessment for coastal communities, an ethical framework to evaluate behavior that contributes to climate change, as well as policies and cultural shifts that might help humanity to respond adequately to climate change.

Colleen Murphy is a Professor of Law, Philosophy, and Political Science, as well as Director of the Women and Gender in Global Perspectives Program at the University of Illinois at Urbana-Champaign. She is the author of A Moral Theory of Political Reconciliation (Cambridge University Press, 2010) and The Conceptual Foundations of Transitional Justice (Cambridge University Press, 2017), as well as co-editor of Engineering Ethics for a Globalized World (Springer, 2015) and Risk Analysis of Natural Hazards (Springer, 2016). Dr. Murphy is an Associate Editor of the Journal of Moral Philosophy, and a member of the Editorial Board of the journal Sustainable and Resilient Infrastructure.

Paolo Gardoni is a Professor and Excellence Faculty Scholar in the Department of Civil and Environmental Engineering at the
University of Illinois at Urbana-Champaign. He is the Director of the MAE Center which focuses on the creating of a Multi-hazard
Approach to Engineering, and the Associate Director of the NIST-funded Center of Excellence for Risk-based Community Resilience
Planning. He is also the founder and Editor-in-Chief of the international journal Sustainable and Resilient Infrastructure, and is a member of a number of national and international committees and associations that focus on risk and reliability analysis. His
research interests include reliability, risk and life cycle analysis; decision making under uncertainty; earthquake engineering;
performance assessment of deteriorating systems; ethical, social, and legal dimensions of risk; policies for natural hazard
mitigation and disaster recovery; and engineering ethics.
Robert McKim is Professor of Religion and of Philosophy at the University of Illinois at Urbana-Champaign. He has published
extensively in philosophy of religion, the history of philosophy, and applied ethics, and he has taught courses at all levels in all of
these areas. His publications include these books with Oxford University Press: Religious Ambiguity and Religious Diversity; On
Religious Diversity; and The Morality of Nationalism, which was co-edited with Jeff McMahan. Religious Perspectives on Religious
Diversity is forthcoming in 2017. Recent and forthcoming journal articles include “On Comparing Religions in the Anthropocene,”
“Environment and Ecology in Religions,” and “The Environmental Relevance of the Relational Self.“ His current research includes
additional work on religious diversity and on its implications and on the relevance of religion to environmental thought.

“The book starts from the idea that, in order to obtain a clear vision and to present documented, relevant, sustainable and accurate responses to climate change, it will be necessary to take a cultural perspective and re-evaluate humanity’s priorities by means of a circular approach, with a clear direction of action at individual, sectorial, national and global levels. … The book persuasively demonstrates that it is essential for our future to experiment with social and economic restructuring, to better combat global warming.” (Ionica Oncioiu, Agriculture and Human Values, Vol. 36, 2019)