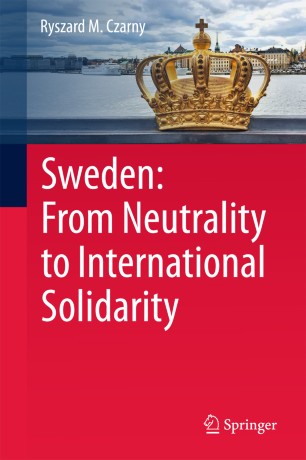 Sweden: From Neutrality to International Solidarity

This book presents the legal and political factors determining international relations, including the processes of integration in all their complexity. The overall structure of the book, together with the composition of its separate chapters, allows for some general assumptions, identifying the main tendencies and placing them in a contemporary social context as well as establishing their relations with the practices of today. The content is a compendium of basic information and data related to the international processes which occur within specific formal, legal and political frames. The book is divided into five parts featuring not only deep historical context but most of all presenting current information and analyses of the last few years. Presented against the background and within the context of the Kingdom of Sweden’s political system and its international environment, the book brings into the foreground issues of particular importance for Sweden’s continuing European integration process and describes its response to the developments in the international situation.

Ryszard Michał CZARNY [tscharni], expert in Scandinavian issues, lawyer, political scientist, researching political and economic conditions of the cooperation among the North European States. Full Professor of Jan Kochanowski University in Kielce (Poland) and since 2012 Professor of the Faculty of Social Sciences, University of ss. Cyril and Methodius in Trnava (Slovakia). Author of many publications, including major works on the Nordic countries: A Modern Nordic Saga: Politics, Economy and Society – Springer 2017,  The High North: Between Geography and Politics – Springer 2015, Regionalism in International Relations, Die Neutralitätspolitik als Sicherheitsproblem des Königreiches Schweden, Sweden in the European Union: Political and Legal Analysis, Sweden – Poland – The European Union, In the New Europe: Glossary of Terms, Energy Dilemmas of the Nordic Region Countries, EU Northern Dimension: Development Study, The Imperative High North: Opportunities and Challenges, The Northern Spaces: Contemporary Issues - ed., The Arctic and Nordic Countries in the World of Economy and Politics - ed., and numerous books, articles and essays in Polish on contemporary international relations.