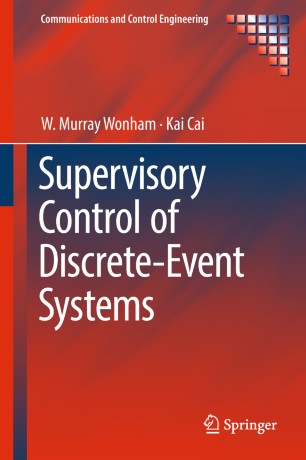 This book shows how supervisory control theory (SCT) supports the formulation of various control problems of standard types, like the synthesis of controlled dynamic invariants by state feedback, and the resolution of such problems in terms of naturally definable control-theoretic concepts and properties, like reachability, controllability and observability. It exploits a simple, abstract model of controlled discrete-event systems (DES) that has proved to be tractable, appealing to control specialists, and expressive of a range of control-theoretic ideas. It allows readers to choose between automaton-based and dually language-based forms of SCT, depending on whether their preference is for an internal-structural or external-behavioral description of the problem.The monograph begins with two chapters on algebraic and linguistic preliminaries and the fundamental concepts and results of SCT are introduced. To handle complexity caused by system scale, architectural approaches—the horizontal modularity of decentralized and distributed supervision and the vertical modularity of hierarchical supervision—are introduced. Supervisory control under partial observation and state-based supervisory control are also addressed; in the latter, a vector DES model that exploits internal regularity of algebraic structure is proposed. Finally SCT is generalized to deal with timed DES by incorporating temporal features in addition to logical ones.

Researchers and graduate students working with the control of discrete-event systems or who are interested in the development of supervisory control methods will find this book an invaluable aid in their studies. The text will also be of assistance to researchers in manufacturing, logistics, communications and transportation, areas which provide plentiful examples of the class of systems being discussed.

Walter M. Wonham received the B. Eng. degree in engineering physics from McGill University in 1956, and the Ph.D. in control engineering from the University of Cambridge (U.K.) in 1961. From 1961 to 1969 he was associated with several U.S. research groups in control. Since 1970 he has been a faculty member in Systems Control, with the Department of Electrical and Computer Engineering of the University of Toronto. Wonham is the author of "Linear Multivariable Control: A Geometric Approach" (Springer-Verlag: 3rd ed. 1985), co-author (with C. Ma) of "Nonblocking Supervisory Control of State Tree Structures" (Springer-Verlag: 2005), and co-author (with K. Cai) of "Supervisor Localization" (Springer-Verlag: 2016). He is a Fellow of the Royal Society of Canada, a Life Fellow of the IEEE, and a Foreign Member of the (U.S.) National Academy of Engineering. In 1987 he received the IEEE Control Systems Science and Engineering Award and in 1990 was Brouwer Medallist of the Netherlands Mathematical Society. In 1996 he was appointed University Professor in the University of Toronto, and in 2000 University Professor Emeritus.

Kai Cai received the B. Eng. degree in Electrical Engineering from Zhejiang University in 2006, the M.A.Sc. degree in Electrical and Computer Engineering from the University of Toronto in 2008, and the Ph.D. degree in Systems Science from Tokyo Institute of Technology in 2011. He is an Associate Professor in the Department of Electrical and Information Engineering of Osaka City University; preceding this position he was an Assistant Professor in the University of Tokyo 2013-2014, and a Postdoctoral Fellow in the University of Toronto 2011-2013. Cai is a co-author (with W.M. Wonham) of "Supervisor Localization" (Springer-Verlag: 2016). In 2013 he received the Best Paper Award of SICE; in 2010 the Best Student Paper Award of IEEE Multi-Conference on Systems and Control, and Young Author’s Award of SICE.

“This book is a must-read for all researchers and engineers working on control of DESs and hybrid dynamical systems. The book is self-contained and it is structured in a coherent way.” (Carlos Renato Vázquez, Mathematical Reviews, October, 2020)