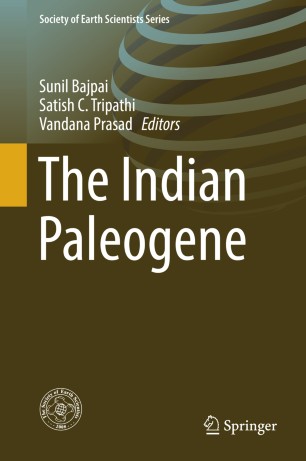 This unique book provides a concise account of Indian Paleogene and presents a unified view of the Paleogene sequences of India. The Paleogene, comprising the early part of the Cenozoic Era, was the most dynamic period in the Earth’s history with profound changes in the biosphere and geosphere. The period spans ~42 million years, beginning  from post- K/T mass extinction event at ~65 Ma and ending at ~23 Ma, when the first Antarctic ice sheet appeared in the Southern Hemisphere.  The early Paleogene (Paleocene–Eocene) has been considered a globally warm period, superimposed on which were several transient hyperthermal events of extreme warmth. Of these, the Palaeocene Eocene Thermal Maxima (PETM) boundary interval is the most prominent extreme warming episode, lasting 200 Ka. PETM is characterized by 2–6‰ global negative carbon isotope excursion. The event coincided with the Benthic Extinction Event (BEE) in deep sea and Larger Foraminifera Turnover (LFT) in shallow seas. Rapid ~60–80 warming of high latitudinal regions led to major faunal and floral turnovers in continental, shallow-marine and deep-marine areas. The emergence and dispersal of mammals with modern characteristics, including Artiodactyls, Perissodactyls and Primates (APP), and the evolution and expansion of tropical vegetation are some of the significant features of the Paleogene warm world.

In the Indian subcontinent, the beginning and end of the Paleogene was marked by various events that shaped the various physiographic features of the Indian subcontinent. The subcontinent lay within the equatorial zone during the earliest part of the Paleogene. Carbonaceous shale, coal and lignite deposits of early Eocene age (~55.5–52 Ma) on the western and north-eastern margins of the Indian subcontinent are rich in fossils and provide information on climate as well as the evolution and paleobiogeography of tropical biota. Indian Paleogene deposits in the India–Asia collision zone also provide information pertaining to the paleogeography and timing of collision. Indian Paleogene rocks are exposed in the Himalayan and Arakan mountains; Assam and the shelf basins of Kutch–Saurashtra, Western Rajasthan; Tiruchirappalli–Pondicherry and Andaman and, though aerially limited, these rocks bear geological evidence of immense importance.